This weekend saw me continuing mine and my dads pilgrimage around the still waters on the Warrington Anglers card, unfortunately my dad couldn't make it this week.  This closed season we decided to take in as many still water venues as possible for two reasons, one to find out where these locations are and two to see seek out waters that have potential and worth travelling too again, so far this season alone we have visited Rixton Clay Pits, Cicily Mill, Pool C and D, Woodshaw reservoir, Mow-pin Pool and the Bridgewater Canal.

This weeks chosen destination was woodshaw reservoir, after reading reports in the week of it fishing well my hopes where high, but unfortunately after arriving at woodshaw around 5.45am and having only a single roach up to 8.30am i decided to up sticks and try the carp pool just up the road from woodshaw.

Woodshaw Reservoir looking a lot greener than our last visit where all the reeds where brown and dead:

I arrived at the carp pool in Aspul around 8.45, it really is just around the corner literally,  there was one other angler on the water and with it being only a small pond i decided to set up on the opposite side to him in a corner swim with a tree hanging over in the margin.  Looking at the water it was like someone had been there 10 minutes before me and thrown in a couple of alka-seltzers as the whole pond seemed to be happily fizzing away.

I decided to set up my margin pole and try a few feet from the bank to my left as there was a few signs of fish feeding under there, my chosen bait was plenty of maggots and a few grains of sweetcorn to give me a bigger bait with the hope of tempting any better fish lurking in the margins.  The other angler on was far from impressed with his mornings fishing on there with only very small crucian carp and tench being forthcoming although he did say he lost a bigger fish earlier on.

My first put in did nothing to dispel his findings with this small crucian carp: 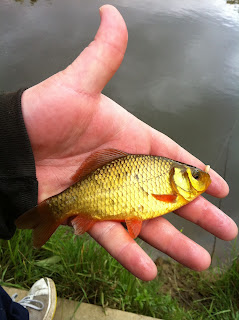 After a few more small crucian carp the float shot under, a proper sail away bite, which i promptly struck into only for me to be left disappointed with the lack of a fish on the other end, or was there? upon bringing my bait in to inspect i was amazed with what was on the other end, a fish i have never ever caught before, a 2 spine stickleback and hooked fair and square in the mouth on a size 16 hook. 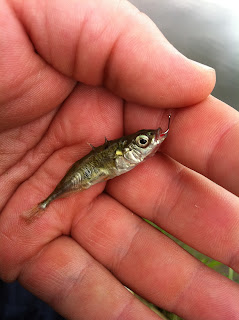 I was watching Stuart Bloors video(http://www.youtube.com/watch?v=uXOo9A7GdW4) to his weekly blog this week and he summed it up beautifully when he said "angling is different for each and everyone, some like sitting and waiting for that one big fish and others are just as happy catching a big net of smaller fish" i find myself more towards the catching a big net of smaller fish end of the scale and that's why what followed from 10am till 12.30 was nothing short of a pond dream with crucian carp, the odd decent roach and a very rare small tench coming with every put in.  The bites where so frantic i had plenty of opportunities to capture it on film, here is an example of what it was like: 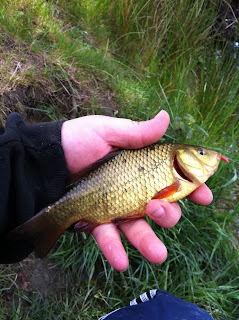 Straight back in again 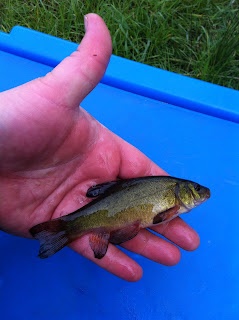 As keep nets are not allowed on woodshaw i didn't pack it in, but to give an example of how many fish i was capturing i put the landing next in the margin and set the timer for 5 minutes as not to cause damage to the fish, with the following result. 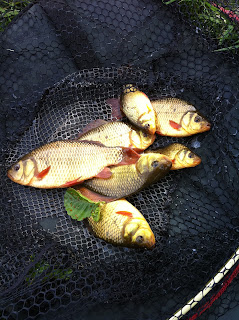 Although in the five minute time scale i was going as fast as i could to see how many i could catch, the bites didn't slow down and i had well over a 100 fish by 12.30.  The swim around this time just died completely and a quick change to sweetcorn showed the reason why, with a much bigger stamp of fish having moved in resulting in the following crusian carp weighing in at 1lb 5oz a new blog pb. 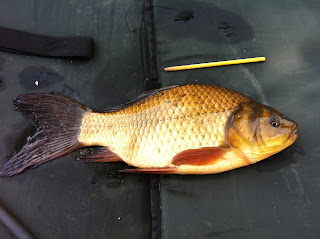 After this the swim took a while to start up again due to the commotion this fished caused in bolting around deep in the swim and only a few crucian's coming afterwards and i decided to call it a day around 2pm a very happy angler.
I went today again armed with my keep net to try and repeat the feat but it was a very bad school boy error, just holding the pole was a challenge and a lesson well and truly learned, poles and 80mph gusts don't mix!!,  i did however have a chance to meet the bailiff and had a good chat about the water, with reports of other anglers catching tench to 5lbs regular and the odd larger carp lurking about i will be back, i suspect the reason i didn't get into these bigger fish was down to not spending enough time on sweetcorn but when that floats going under making a change is not in the front of your mind.

All in all its a venue that we will certainly be visiting again with both me and my dad loving fishing ponds.  Next week will see us out on the road again with the possibility of a rare midweek trip on the cards, till then tight lines and i have also put together a mini video for this post below.