River Tame Fishing: Sticking it out for a chub or two

A warm welcome to this midweek mini update.  With the Nights long and it not getting dark till well gone 9pm most nights it has offered me the opportunity to get out on the bank for one or two midweek sessions.  The pictures taken on the session would be too much to just add onto the end of the normal weekly blog so these little mini updates give me a chance to go into some detail and give the session the time and effort it deserves and not just be a little paragraph at the end of my weekly blog.

So with that it is onto the update:

River Tame Fishing: Sticking it out for a Chub or Two.

The river flows from its source in the Denshaw moors in Greater Manchester through many of the built up boroughs in Manchester before it arrives at its confluence with the River Goyt to form the River Mersey that then goes on to flow into the Irish Sea at Liverpool.  The river for many years suffered, like many industrial rivers in the area did and still do, with pollution and for most of its recent life the river was seen as a dirty polluted river and ignored by anglers and water enthusiasts alike. 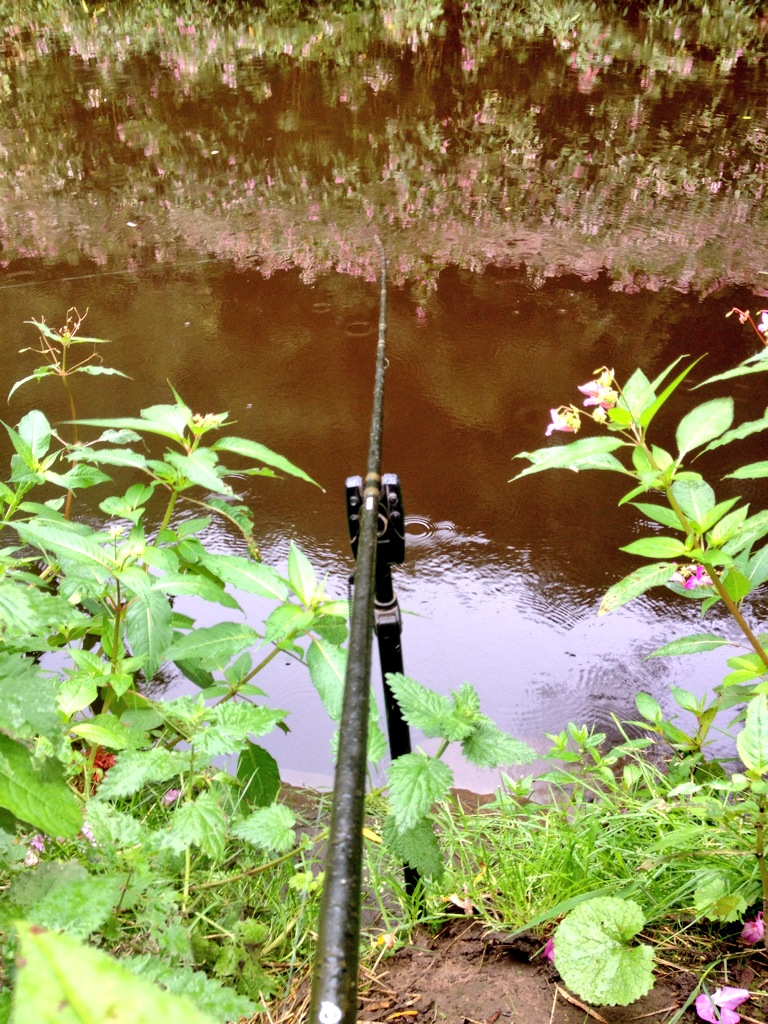 It was after one of these pollution incidents the river was stocked with Chub, Roach, dace and a small number of Barbel and with close monitoring from the Environment Agency the fish in this river have flourished in the past few years.  As mentioned above the River joins the River Goyt to form the start of the Mersey and it is no secret that the River Tame has always sat in the shadow the Barbel rich river it joins, the Goyt.  The river goyt for many years has been an established river holding some massive barbel to double figures and some colossal chub and these fish have bred and spread down stream into the Mersey offering both rivers a stable base for fish to swim up either tributary.

The River Tame can offer some superb fishing to the angler but she is a wildly unforgiving river and her slow meander can make fishing her a frustrating experience, one day you will have a few chub and maybe some dace and you can go the very next day and not get a bite, now some say this is river fishing for you but having fished a number of rivers for a few years i have never known it to be so up and down and results on this river are so erratic it is a river we decided last year to no longer commit a full day session too on our Saturday fish and this is purely down to the erratic results it offers, its a long full day trotting with no bites i can tell you that.   That's the history behind the river lets get onto the fishing.

A big perk of my job as a Civil Servant is a fantastic invention called Flexi-Time and in its simplest terms it means I can build up hours to a maximum of two days and use these to either take whole days off or finish early,  for an angler it is a god send as it means i can get out of work on the odd occasion in summer around 2pm and beat the rush hour traffic to make the most of an evening on the river but it really comes into its own in winter when finishing work at 3pm can mean the difference between getting out for a few hours piking on the canal or not.

Leaving work at 2.30pm i quickly nipped home and i knew i just needed the bare essentials for an evenings trotting on this river so it was a simple rod, two bank sticks, landing net pole and my net bag containing keep net,bait waiter and landing net.  The net bag also doubles up as perfect storage for my flask and a ice cream box containing the reel and terminal tackle so pretty much light weight and your away all that remained was to pick up my uncle.

Arriving around 3.30-4pm we unloaded the car and walked the entire stretch and to show how varied results can be on this river we bumped into two anglers coming off who had been on all day since first light trotting and had caught nothing but minnows while the next lad we passed had been on a few minutes and had literally cast two maggots out with no feed and nailed a chub as i have said its a brutal river results wise.

Walking the stretch there were a few anglers on so we headed back down stream to a quiet area that looked like it would hold a few fish.  My swim had a good depth under my feet and actually shallowed up into the middle.  The river is a dream to trot and if it did have the numbers of fish the dane has in it you would have a comfy fish and could bag up a decent net. 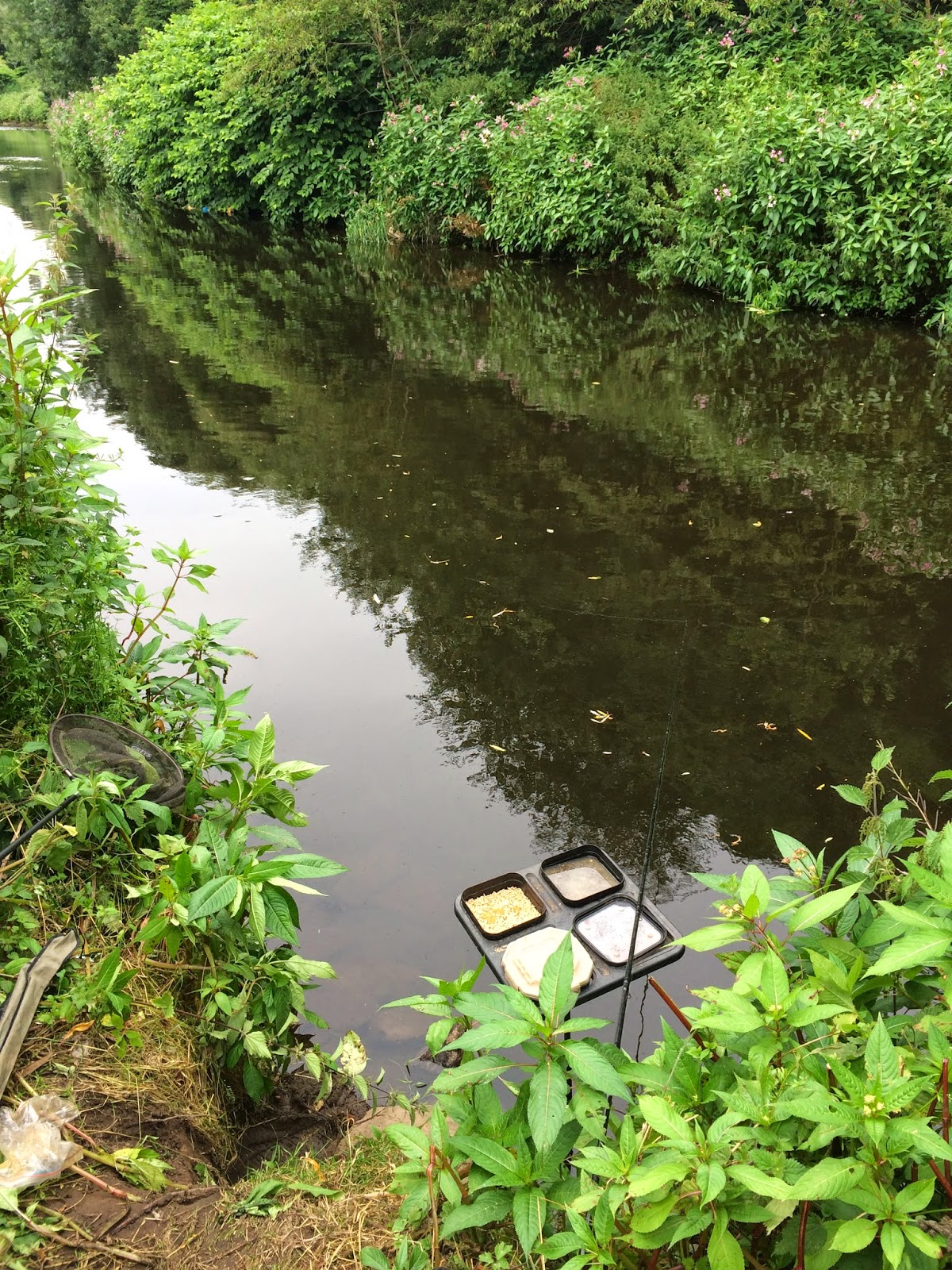 I am not one for the travelling light and fishing swim after swim and prefer to stay in the same swim hoping to draw the fish and on most rivers this works as your bait trundles down stream drawing more fish up to your area and it should be the case on this river as most times you do not have a person down stream but they just do not seem to move up.  The bites for the first hour or so where a bite a chuck all on my hemp and most times i would be over the moon but the fact that it was a minnow a chuck got a little tedious, i guess you get what you deserve using maggots. 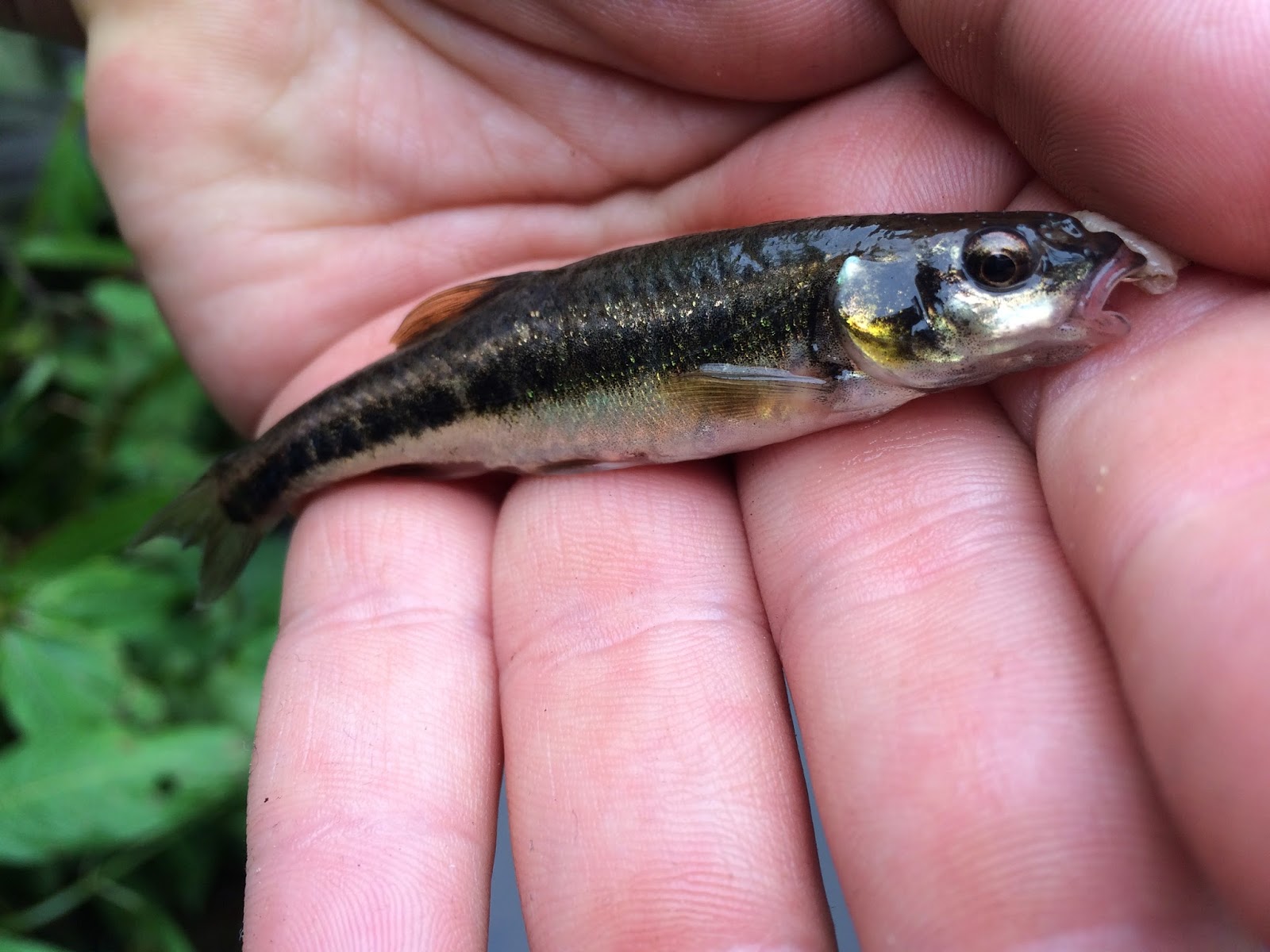 At around 7pm we decided to move to an area with a bit more flow and a bit less depth it was a risk but having fished 2 hours we guessed if a chub had been around we would have had some action.  The new swim offered a deepish margin down to some shallow water and i trotted the float down a cracking 15 yard trot under my feet feeding quite heavy to try and not only feed off the minnows play on the greedy nature of mr chub.  Just getting on for 8pm i struck into a better fish that i felt kick and go across the current before the hook pulled, it certainly was not a chub and if i had to put a name to the fish i would say it was either a trout or grayling, encouraging stuff.

As the sun dropped behind the trees i began to feel a bit more confident and it all just felt right and with nothing to show on the line i had been fishing i started to cast along the far bank line and fed maggot a bit upstream.  A few trots down and the float buried and in the moment the rustle of the wind in the trees and birds coming into roost all where blocked out, still there in reality, but for me it was just me and the solid fish on the other end of my line.  On this river you always know this could be the only chance you get so you have to play them lightly and all was going well as the clutch ticked over nicely as the fish held deep and swam upstream.

All during the battle i was very aware of the fragile hook length i had on and even more conscious of the snag to my right hand margin.  Hook lengths really do play with your mind as you put them on to give you the confidence you are doing all you can to get a bite from any fish but when connected with a nice fish you wish it was not there.  The fish at this point was coming along my inside margin and still on the bottom and i knew if it continued on the same line i was in trouble so i began to give it as much upward strain as i dared and got ready with the net knowing the first time it topped was my chance to net it and i was in trouble if i missed of the fish had a chance to turn and dive. Net in hand i tightened the drag slightly and lifted and up came a big pair or white lips which i knew was in no way related to this fish waving a white flag and before it got a glimpse of my ugly mush on the bank above it i shot the net underneath its brassy flanks. 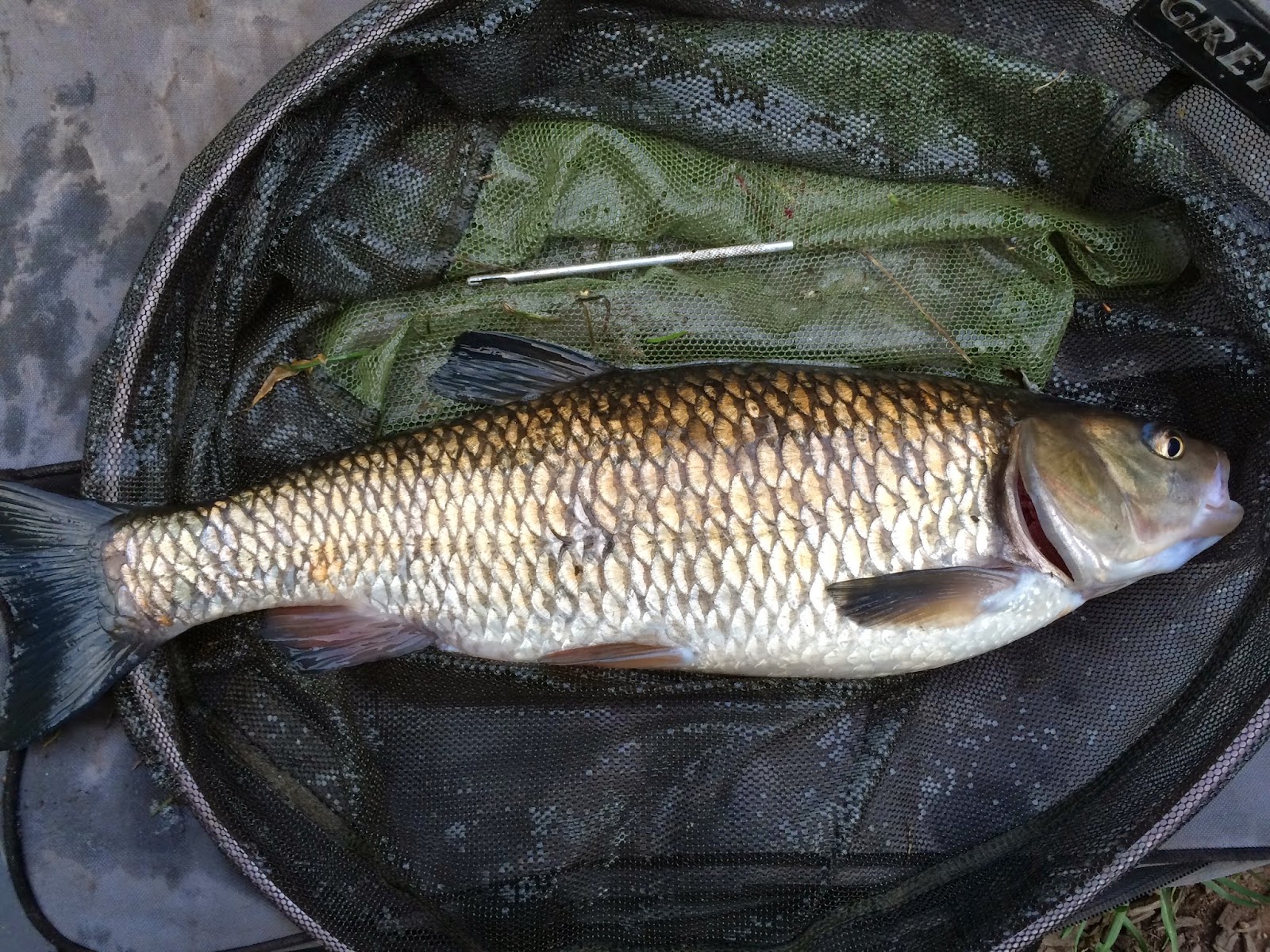 Needless to say this fish had plenty of life left in it and went mad in the landing net almost flipping to freedom as i brought it up the bank.  On the bank the fish looked like a nice fish and that's when it hit me i had forgot to pack the scales so it was a quick few pictures and into the keep net.  I always bring a long my keep net when chub fishing as i have noticed in the past when fishing the River Dane quite dramatic improvements in the amount of chub i catch from one swim when i placed them in a keep net,  with less than a hour of the session left i did not want to ruin and slim chances i had of another fish,  I hasten to add had this fish been a barbel it would have been rested and returned to the swim.

The fish in the keep net i began to feed maggots down the far line again and i can not really explain it but it just felt right for another fish, whether that is just confidence that goes with catching one but something inside just felt right and it could only have been a few more trots down when the float buried again and i was into another chub which was instantly recognisable by the fact it shot right into my margin and i admit i was in all types of trouble as it buried into the sunken brambles down stream.  A epic amount of side strain to the point i was sure my hook length would go was applied and i managed to steer the fish a safe rod length out and this is when it saw home in the shape of the snag upstream, if i turned this fish once i turned it four times and i must say after the fight of the other chub less than 10 minutes earlier my arm was aching off and i was one relieved angler when i finally got the second chub in the net. 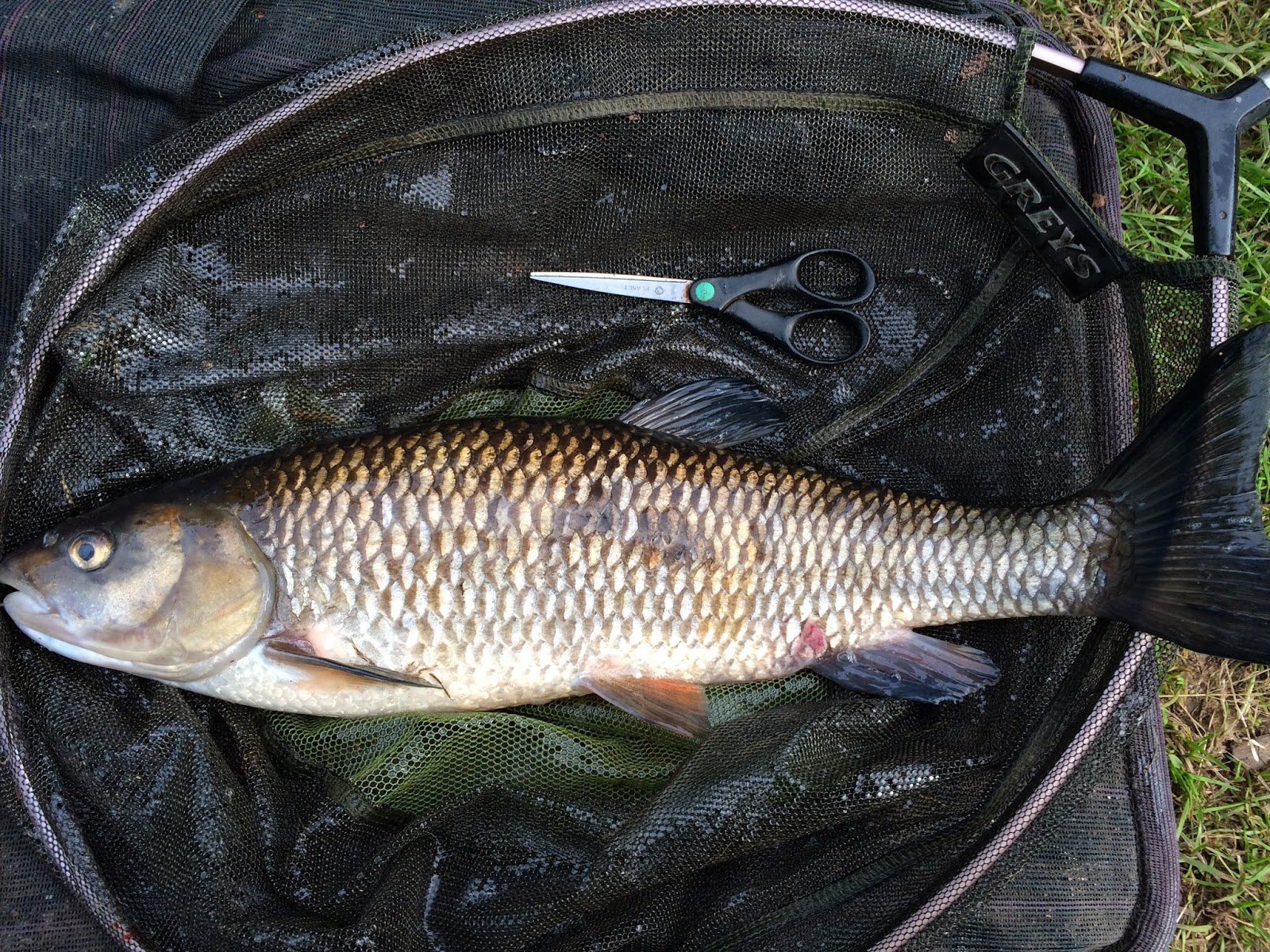 The last half hour went by in a blur and no more bites came as we fished into dusk.  These two fish made it a nice session for myself and although neither were a personal best it would have been nice to put a weight to them.  The two fish also make it look like a good session but in reality it was a hard slog to the point the fish came and anyone that has done some trotting will tell you 5 hours of trotting none stop for 3 bites is a killer and the reality of this place was summed up by my uncle who went through the same amount of bait as me and also trotted for the same amount if time did not get a sniff of a bite, as said a really tough and unforgiving river. 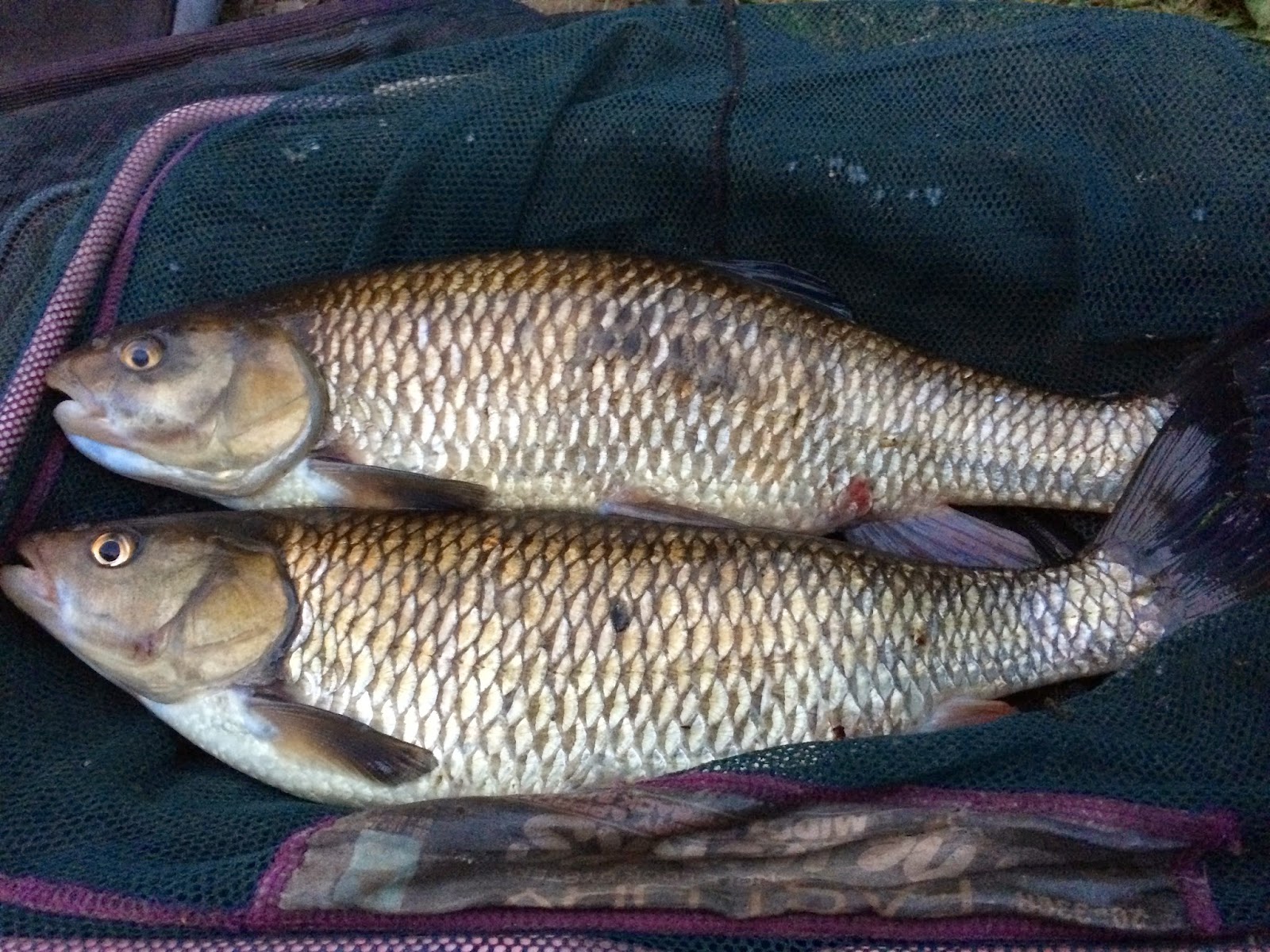 Till next time its tight lines,