A warm welcome to this week’s blog update, a few weeks back I was approached by Calor Gas to review a product from their summer collection called the Calor Grill to go.  After contacting the company and realising how good they were to deal with I agreed and a few weeks ago I received the product.  I would like to state now I receive no affiliation money for any grills purchased through any links in this review. 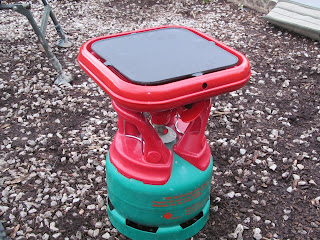 “3 in 1 Sear, grill, boil… The reversible cast iron cooking surface provides a stable and versatile cooking platform ideal for Picnics, festivals, camping and those summer months on the beach.” 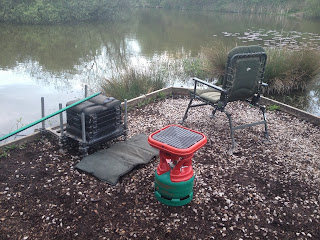 In this day and age where the internet dominates and more and more products are purchased online a company’s customer service is becoming a vital part of a successful online retailer’s armoury and as I have mentioned before on this blog I have been on the wrong end of bad customer service so the way a company deal with their customers is really important to me and I have got to say Calor Gas where a joy to deal with both via email and over the telephone and the speed of their reply’s left me feeling confident of their high customer service levels.

The product arrived and was well packaged and my first impressions when I got my hands on the grill were it was well made and felt solid in your hands and was stylish to look at.  The weight of the product is advertised as 6.5kg and I would say the majority of that weight is taken up by the reversible hot plate.  Within the package along with the Grill to Go was the gas valve for the canister, a burner and a heat shield. The product comes with large easy to follow instructions that show you in 4 easy steps how to attach the gas valve to the canister and also how to install the Grill to Go on top of the 5kg Gas cylinder. 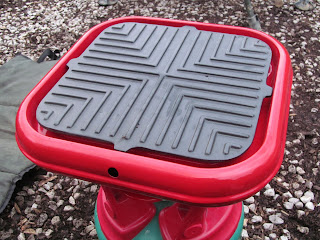 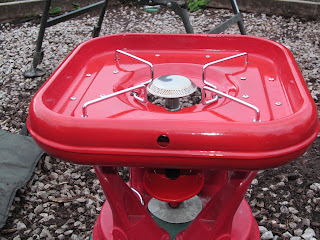 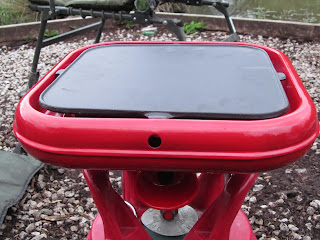 I have been taking my new companion with me on my past few trips to the bank and over that time have used all the different functions that come with the grill which include with flat hot plate, with grill hotplate and with open burner.  I first used the grill without the hotplate on and took a pan and frying pan with me to both cook some dinner and boil water for a warm drink.  The burner plate has 4 metal prongs to sit the pan on and I didn’t have any problems with the pans sliding whist on top of the grill and was really impressed with how solid the grill to go felt once housed on top of the cylinder.  I did do some timing’s whilst on the bank to see just how good it was a heating stuff up and I timed the grill at 2.37 minutes to boil a pint of water on a medium heat. The second and third trip out with the grill I used it with the grill plate on top and again was impressed with how fast it heated up and cooked the food we had taken with us again I did some timings and from placing the stone cold plate on top of a medium flame it began cooking the food which in the test case was bacon in 32.6 seconds.  After using the grill plate I found it very easy to clean when I got home and even a few hours after finishing cooking it cleaned easily in warm soapy water. 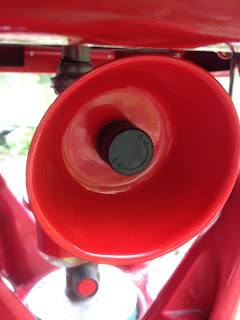 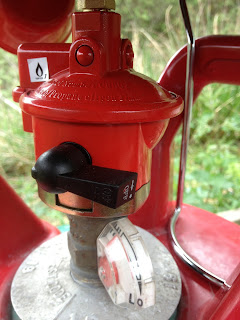 To summarise, the Grill to Go is a fantastic piece of kit that I can see being really useful for both anglers looking to spend a few days on the bank and the sole angler out for a full day pursuing their sport.  For me personally I will be using it throughout the summer but I have my eye on this piece of kit for our winter campaign on the River Dee and River Ribble where having a warm meal inside you in the middle of the day is essential we also got great use out of this grill from a family point of view over the warm bank holiday weekend.   I have to say I have thoroughly enjoyed both using and reviewing this product on the bank and am really looking forward to using it in the future and it gets a big thumbs up from me.

on to this week’s fishing:-

Saturday 11th May 2013 – Tench on The beautiful Rixton Clay Pits 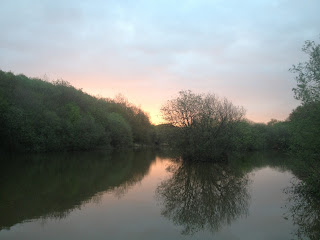 After catching that sole tench last week on Rixton I was eager to get back and get amongst some more of those teddy bear eyed tinca’s and with even more field testing of the Grill to go to be done I decided to get their nice and early to get one of the readymade pegs.  My dad joined me on the session and before we even set up we decided to take in the atmosphere of this atmospheric of places, there really is no place like it on the Warrington anglers Card and is probably the only water on the card that I would fish in the summer months if it contained a few more carp for me to target.

There is something about this place that conjures up everything I love about angling from a fishing pint of view it has the vast shoals of silver fish and those hard fighting tench but aside from that the place is set up in such a way that nearly every peg gives you your own piece of water away from other anglers that means you can just bask in this places beauty. 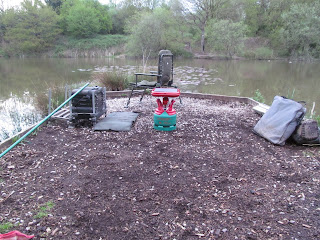 The tactic for the short session was as always with my fishing simple with me fishing a poly ball on the pole for the silvers and a boilie on my sleeper rod for the tench and unlike last week I decided to be a bit more tighter with my baiting up for the tench and concentrated on an overhanging tree to the island which just screamed fish to me. 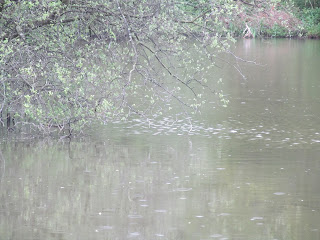 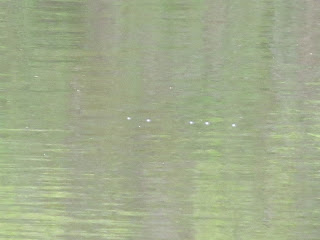 Almost instantly after baiting up with the boilies the tell-tale bubbling of a feeding fish could be seen over my baited area and full of expectation I set about feeding up my pole swim with groundbait and maggot, fully expecting the sleeper rod to wake for its dormant vigil.   Unfortunately it took a good hour for the first run on the sleeper rod despite the constant bubbling in the area and the result was a fish of 4lb 8oz, an average fish for this venue. 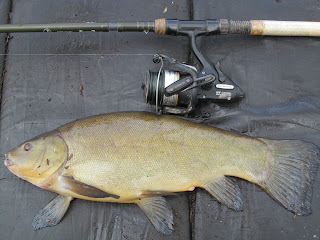 The fishing was patchy on the silvers front with the better fish coming after long spells of tiny perch and roach and none of the decent bream from last week showed up at all but I think that there was a very good reason for all this as all morning there where fish crashing all across the surface almost as if they were being chased, now I put this down to perch but I guess it could have been pike and further evidence of pike being around showed its face later on in the session when my sleeper rod screamed off and I struck into a fish that after a few seconds came off leaving me with a clean cut half way down my hook length.

I continued to persevere on the pole and noticed that changing depth saw me connect with the better fish before they got spooked and moved on and to be honest this game of cat and mouse continued all day long and it was a joy to have to work for my net of silvers.  The better roach form the session are shown below. 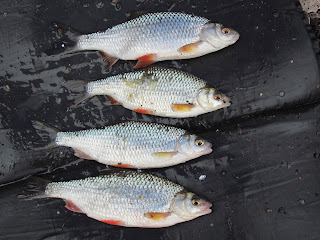 A quick glance at my watch shown it to be around 9am and I could feel the bacon in my cooler bag calling me in a big way so it was time to fire up the grill and get a warm breakfast inside us but in true fashion as I was just about to rise form my seatbox to reel in the sleeper rod it sprung into life and boy did this tench fight under the rod tip as it kept deep and made runs for the lillies and the tree line to my right and had my 1.75lb test curve shimano rod bent right over. 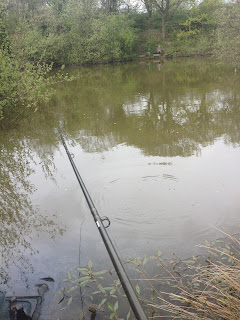 The fish finally tamed and on the unhooking mat it was time for a quick picture and for it to be returned safely in the shallow margins to my right. 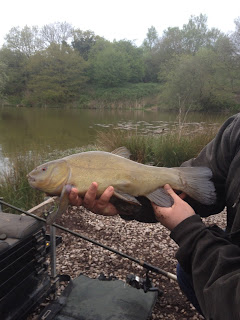 The fish sulked into the reed clearly not happy with being disturbed on such a lovely morning.  My stomach was rumbling but I wasn’t about to let this stop me getting the rod re-baited and back out there the tench where having it and I wasn’t about to miss out so out went the rod with another good handful of boilies, now for that breakfast. 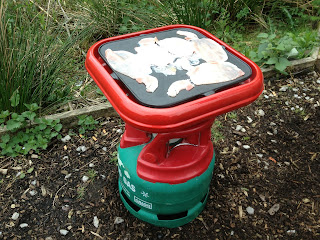 Spurned of by a nice breakie it was back to the fishing and I continued to catch some more silvers on the pole but unfortunately went on to miss two runs on the sleeper rod one of which was down to the fish coming towards me and me not reeling in fast enough to connect with the fish and the other was the mysterious cut in my hook length which I put down to a pike.

The session moved into the last two hours and I decided to pack the pole away and give the keep net a well needed air dry and spent the last two hours just fishing the single sleeper rod on the spot. The final net of silvers came to just over 8lb but was you can see contained a fair amount of fish showing just how many smaller silvers where about. 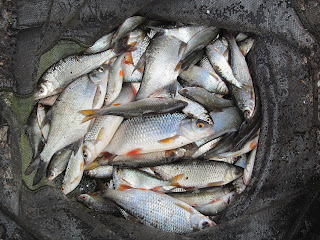 I took two more tench in the last two hours of the session and was more than made up with the amount of tench I caught on the day and served as a great confidence boost that again my rigs are working and it’s the fish not me why I am not catching on curlston mere. 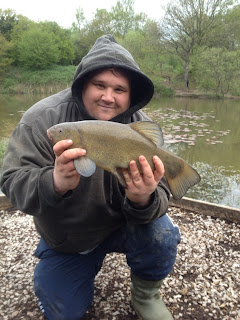 The last two hours were also spent admiring the fantastic array of birdlife this place has to offer and as I was armed with my camera for the grill to go photos for the blog I took the opportunity to capture a few of them on film and what a vast array of speciescall this place home with coots, Canadian geese, ducks, ducklings and I think ring necked ducks all calling this place home and that’s without even mentioning the buzzards calling overhead and the woodpeckers echoing through the trees. 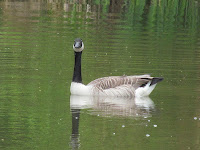 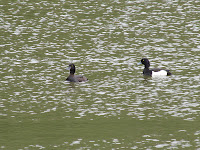 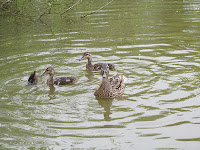 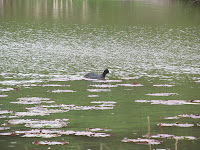 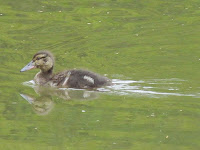 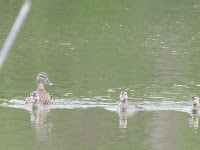 As we packed away the family of older ducklings moved in and I have never ever before witnessed baby ducks diving under the water for so long, one of them was more like a submarine than a duck, so I end this part of the blog by introducing you to the Mughty Diving Ducks!

Full of confidence from the tench session on the Saturday and with a free evening I decided to venture onto a proper carp venue in Grey Mist mere.  This is the first time I have ever fished a proper carp venue and was taken aback by the sight of large carp honking themselves clear of the surface, a sight I have never seen before and certainly got me going.   With only an hour or so to spend and knowing little about the venue I quickly had a scout round the venue and settled on a swim I thought would produce for a number of reasons.  As always I kept things really simple and was rewarded with a really nice female tench of 5lb 10oz, not the carp I came for but a fish is a fish on a first trip on the venue and more than I could have hoped for. 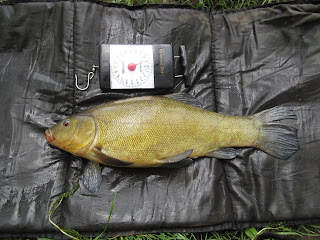 Till next week I wish you all tight lines