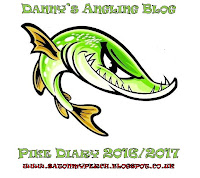 A little Look Back...

So we embark on another season of adventure on the bank in pursuit of pike.  Last season i set myself a target of 10 double fugure pike and i was more than made up to surpass that total.  The season was one of homing my skills on a small waterway, learning methods like wobbling dead baits and presenting dead baits in the right areas.  Last season Dave came into the fishing more and it seemed like the piking developed a more social side and it is a part of my fishing this year i want to continue. Last season also saw me dipping my toes in new waters and taking leassons learnt and using them on these new areas.  Spending time on the bank using my watercraft to find the pike and did have some success before my own safety was put in doubt and that really ended that part fo the adventure for me.  The season ended nicely with around 70 pike i think on the bank and over 10 doubles.  A few nice fish graced the bank for us all with Ste and Dave catching a nice upper double and garry having good success early season with nice fish, i ended the season with a nice 17lb pike that for me was a perfect end to the last season. 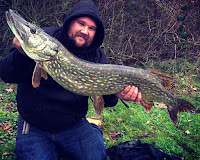 a full recap of last season is on the top bar or on this link: http://satonmyperch.blogspot.co.uk/p/201516-pike-seaon.html

So this season, a season of big changes and building on knowledge built up i hope.  First of all the blog now has its own Youtube Channel for the start of this pike season and pike fishing will be most of the content while i get into the swing of video logs.  The sesssions are structured and give you time to plan them out and plenty of time while waiting for a bite to go over stuff.

This years diary will be a mixture of written diary blogs and links to the youtube videos for other sessions, i dont feel there is any benefit to writing and then adding the same content in video format.  My fishing i am hoping to again aim for 10 doubles on the bank and around 70 fish and it may prove a tough task this year as i am really hoping to spend as much time as i can on new venues this season, in particular the river.  So taking lessons learnt on smaller venues and adapting those techniques on bigger ones.  Please take a second to subscribe and comment on the content its the only way i can know your thoughts and make changes.

10th September 2016 - Testing the Water....
My homework done on the River I had an idea where i wanted to start my campaign come the 1st October but i wanted to be prepared for that opening day and have a quick check to see if my hunch was correct about this area holding pike.  A session on the pole with a live bait rod out proved there was plenty of prey fish in the area to sustain pike.  Two pike on a livebait rod set up as paternoster showed my hunch was right and i would be confident heading here on the opening weekend. 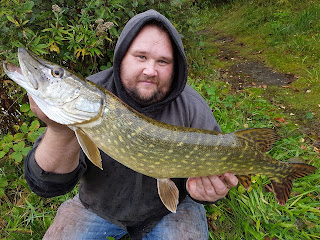 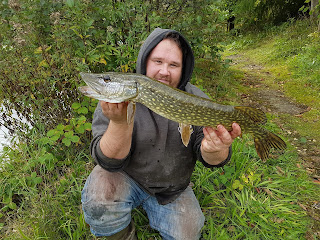 23rd September 2016 - One small Step For Dannys Angling Blog Videos....
The night before i had spent some time getting my rigs together and i decided to bite the bullet and put together a video on how i make my wire traces for my piking.  A 12 minute video that breaks the ice on the channel and shows how i make my traces.


24th September 2016 - Biting the dust...
My first session on the river, a week away, i decided to nip out with the dead bait rods to see if i could catch the odd pike.  Pointing the camera at my face on my way to the venue, a line in the sand had been drawn and the fist pike session video went live that night on Youtube...

01st October 2016 - A Day On The River......
So the day on the river was finally here and a chance to have a full day in search of pike.  My uncle on the pole for the day i decided to fish one Deadbait rod and one Livebait rod but also had my trust wobbling rod in tow.  A slow start but all comes good, check out the session in the video blog below:

02nd October 2016 - That First Social
The second day of a three day weekend pike fishing and i was back on the banks with my mates Ste and Dave for a social, boy have i missed these sessions.  Meeting up it was like we had just left the bank on the last season for pike, all the banbter was there form the off and it was great to be out with them.

I struck first blood with a tiny of tiny jack pike that was literally a pound wet and then proceeded to miss two takes, thats life.  Dave and Ste quickly put pike on the bank and like any social its always the aim for everyone to get one, we do seem to do quite well with this one. 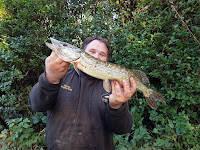 Other underwater obstacles where dredged from the bottom before i picked up my next pike and dave rounded off the session with this cracking near double figure pike.  given all the other pike where mere tidlers it was good to see the odd better jack around. 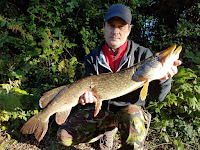 3rd October 2016 - Wobbling For River Pike
In this video i go into detail on a rig taught to me by my friend Ste Daley, a simple but effective rig.  A session fishing for pike on wobbled roach.


10th October: Wobbling for pike Rig
Early feedback on the videso has been great but there has been some positive feedback regarding what i could add to them,  one such thing was rigs, in this episode i hit the bank of the river and catch some pike using a wobbled roach approach.


16th October - My paternoster rig for piking
In this video i go into detail about my rig i use for my pink fishing on live baits and deads using a paternoster rig.  The reason i use it and some fish on the bank.

23rd October - Red letter piking...
Well what can i say when a move pays off it pays off, i go into more detail in this written blog about the session but safe to it was a session i wish i have video logged.  A move form one spot saw 9 runs with 7 pink on the bank with two low doubles and a 9lb pike in the catch.  Certainly got the blood flowing and great session on a new river. 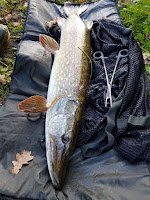 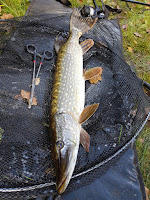 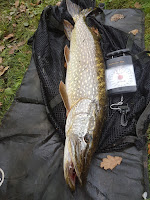 A trip to a Mans River....
A trip to a river i have not fished for a good year or two.  A river i saw pike taken for the pot first hand and it had a real effet on both the quality of the dace and of course the pike fishing.  A return for a day session had me excited for the day ahead, but would i get a chance of a pike?

30th October - A Morning of  Discovery...
So the pike season is a month in and the cold weather is starting to show and with it so are the pike anglers in the usual haunts i see them each year.  Easy access and rumours of a 20lb monster are enough to attract the circus to the popular spots.  Me? Well as you all know im the completely other end of the scale when it comes to this and quietly i began baiting up an out of the way spot,  A week of pre baiting and it was time for the first cast to see what my work had brought in.

Within 20 minutes i saw a nice swirl down the bank giving away the presence of a nice fish.  A smelt presented on the bottom, injected with a bit of air to slightly lift it of the bottom was soon snaffled up and my reward was a 11lb2oz fish. 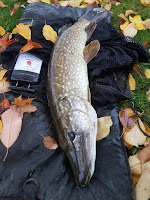 Double number six of the season on the bank the short morning session was rounded off with 5lb jack.

River Madness before Mere Trip
So the day before our trip to the mere and i decided to hit the river in search of a few pike.  A week or two earlier i had done well with 9 runs and 7 pike.  I arrived on the venue and quickly presented a bait a foot from the bank and another a rod length out.  It didnt take too long for the first fish of the day to show its face, a 5lb 11oz jack.  I then lost a smaller fish at the net, 2 bites quite quickly i was full on confidence.

The margin rod then slid away and striking into it i knew i was into a better fish, keeping deep and taking line it was a hard fight.  Sliding her into the net my arm was aching such was the hard fight and peeling back the mesh a 14lb3oz fish lay on the mat, the best fish of te season so far. 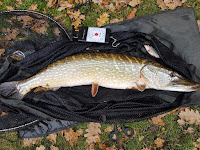 A flurry of jack pike, well3 to be exact to 7lb followed through the day before an right ugly 9lb pug nosed pike showed its face right towards the middle of the day.  I left made up with the 14lb fish, my first proper pike of the season and another double off the list. 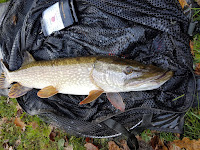 The Estate Lake Social Session!
Simply put this was my third social session on this english estate lake and the past two trips had saw me blank twice, would this be my turn?

Confident and catching - A Sleeper Rod For pike...
So a Saturday session and a chance to catch a few silvers but i also packed in my two pike rods just in case action was slow.  Bites came quick on the bolo rod catching roach and skimmers.  A live bait paternoster rig set up to my left was soon snaffled by a small jack and i thought my eye could be in for a few pike on the session. 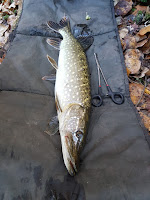 I then settled into the bolo fishing with one live bait rod out with no action at all.  I then had half an hour to forget on with the float rod getting i tangle after tangle to the point i threw the rod up the bank and just packed it in and put out two live bait rods.  A skimmer presented on a patenoster rig i walked to the back of the peg to take a picture.  Now i never normally fish the bait runner for pike but i left my drop offs at home.  Next minute all i hear was a carp run esk run as my delkims screamed.  Striking into the fish she fought like you expect all river fish to do.  At just over 9lb she felt alot bigger but alas the scales don't lie and to be honest she was one of the most beautiful pike i have ever caught.  Pike number 45 of the campaign.... 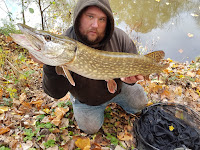