One of the aspects of fishing i love more than anything is the diversity of the adventures that can be created under the umbrella of the word "fishing".  A man or lady mentions they are an avid angler and from that one sentence all manner of species, methods and locations can begin to sprout in all directions.

My journey, until around 2 years ago, never really involved the pursuit of carp but in the past two years i have slowly started to dip my tentative toes into the world of carp fishing.  A few sessions on a small local water chasing carp on floating crust and on the method feeder allowed we to gain some confidence in catching carp to high upper doubles and allowed we to gain confidence and an identity within carp fishing of how i would want to approach this branch of the sport.

I soon discovered i was never going to be an angler who would be bivvied up for over night sessions, i found enjoyment in short morning and evening sessions adopting and developing the mentality of a little bit of bait in the right spot over sitting over a lot of bait and waiting for the carp to find me approach.  I will never rule out the possibility of this journey winding with me delving deeper into carp fishing and the longer sessions but these short sessions on the small and intimate water and the lovely captures like the common below served the purpose of gaining confidence in my approach wetting the appetite for greater challenges. 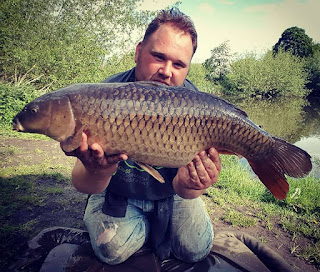 Sometimes we set our sights on a venue and others we arrive on them by chance, this adventure began with the latter.  Myself and my mate Garry where talking about new venues and we decided that we had nothing to lose in trying a local reservoir.  Knowing the venue was quite a large one i scaled my gear right back for the trip taking only the bare essentials.  A rod bag with two rods, a bucket containing rig bits bait and my licence and a large unhooking mat with a landing net. 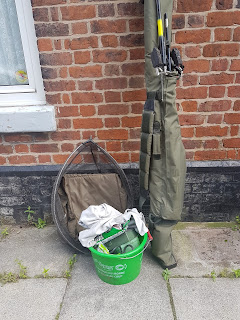 We arrived at the venue around 4pm and we decided to give the more well worn pegs a miss and opted for the more uncomfortable, quieter and ultimately less fished peg.  A steep slippery bank down to a flat bank of around a foot or so provided just enough room to get bank sticks in. The green untouched banks testament to the lack of occupation in the swim and i instantly liked the look of the place.

Its weird with fishing how you can instantly like or dislike a venue just by the feel and ambiance of the place and i instantly liked the look of this water.  It of course had plenty of nice pegs with features galore where you could lay out a bed of bait and wait for the carp but it also had plenty of those uncomfortable out of the way quiet pegs where i knew the carp would be found at times of high pressure.

My tactics for the session was my trust method feeder filled with a mix of dampened micro and 2mm pellets with the added attraction of Cheshire Particle Hemp Oil.  The hook bait the ever reliable Bait-Tech The juice dumbells, a combination that had done we well all spring and summer and i am know that confident in it i leave the rig out there knowing the only factor in getting a run is if a fish comes across the trap.  I know if they do then they will eat the bait its that simple ion my head now such the results its produced. 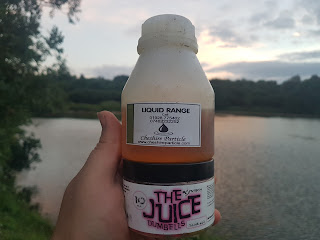 Casting around to find the gaps in the weed i soon found a clear patch out in front of me and another to my right, you could tell instantly when you had hit the spot as taps on the feeder from the roach would be instant.  I didn't mind these at all as a crowd attracts a crowd as such and i knew if the roach could find the bait then so could Mr carp.

After hooking into a few roach i began to feel the pellets where not hanging round long and this trap does reply on the carp fishing the pellets dispersed from the feeder and you bait and more importantly your line being covered by the pellets so regular and accurate casts where the order of the day. 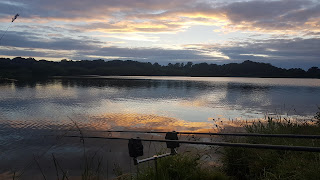 The taps stopped and i remember watching the tip fall silent, a large line bite gave away the presence of a larger visitor to the swim, another long pluck and half way through the tip resetting it wrapped round and the delkim alarm screamed into life.  Lifting into the fish it was all heavy as the fish dived straight for the nearest weed bank.  A sustained pressure on the fish saw it come free and a wallowing almost bream like fight ensued until the fish was coming up the shelf and as it did panic stations began to kick in and the fish went on a number on long deep runs.  It was a fantastic fight.

Thankfully it was a fight that went in my favour and with an aching and relieved arm the fish slip over the mesh, a lovely dark mirror carp of 16lb 10oz1! 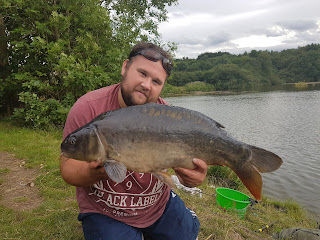 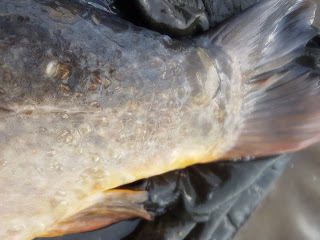 Whilst playing the first fish the other rod screamed off and for some time both me and Carry where playing carp.  Unfortunately a hook pull on Gary's fish put pay to a fantastic double fish brace shot that would have really set off the session.  The rods back out the taps from the roach continued and the rod tips danced almost as to the beat of the lapping waves as they washed over the rod tips.

The clouds moved in and with them so did the light rain but this did not deter the carp as again the right hand rod pulled round as the fish was hooked and bolted for the nearest reed bed.  Strong tackle and gentle pressure the fish was back on the move and it soon became apparent that these carp where fine wallowing in 10ft of water until you started to bring them up the shelf.  That part of the fight the carp where going mad and making long hard runs pulling line from the reel but soon a nice upper single figure carp was gracing the net.  Two fish on the first session i was made up. 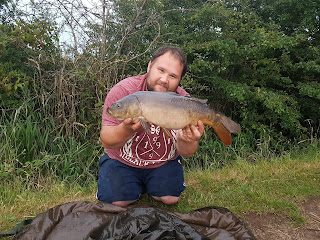 The next hour or two passed by with nothing of any note on the carp front, roach still continued to come in spells , but it was not until right on last light that my rod again sparked into life.  I am always a great believer that when on a social its always more enjoyable when you all catch and my mate Garry had sat through the rain and the roach with me for the passed few hours so i allowed him to take the last run of the evening.

It turned out to be another fantastic low double figure fish.  The clear water giving the fish a lovely dark back that gave way to yellows as you scanned down its flank.  They where lovely looking fish to catch and this one certainly put Garry through the mill as it came up the shelf with some long hard runs. 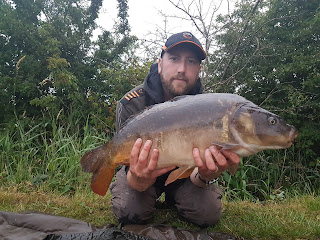 The gear packed away it was time to reflect on the session and what a first session it had been with 4 runs and 3 fish on the bank.  We had arrived on the venue not really having any expectations but had left with the grit between our teeth for more.  This venue certainly captured me and i could feel the start of another adventure taking hold.

The full session is available in video format the blogs you tube channel here: