A warm welcome to this weeks angling blog i hope i find you all well and your nets wet.  Well not much to report from last weekend as Saturday the other half was in work so a day was spent in with the little lad and girl, playing shop, dinosaurs and telling fishing stories was the order of the day.  Sunday morning i headed out with our Baz for a session on the feeder...

Setting up the weather was not so bad at all a sharp nip in the air but nothing to worry about.  A mix of ground bait made up and settled into the peg i began making a few casts.  It is always a case of patience in winter and building the swim up over time, this can take a good hour or so.  A hour in we had our first fish on the tip and small ice cold roach. 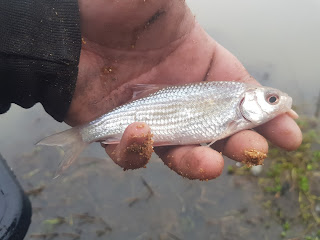 Not long after returning this fish the sky turned that shade of grey, you know the one that says one word to you...Snow!  Over the next half an hour the clouds built up and a slight rise and then drop in temperature saw the first white fluffs of winter fluff fall from the sky.  Only the odd flake at first but before long we found ourselves sat in a full on snow flurry.

A few more fish came but the weather was slowly getting worse and worse and looking back at my tackle bag it was now covered in a layer of white.  Baz sat behind me was feeling the cold a bit so we decided to call it a day and pack in and head home.  Testament to the heavy fall the picture below shows how much fell in the time it took me to put my box down and bring my keep net in. 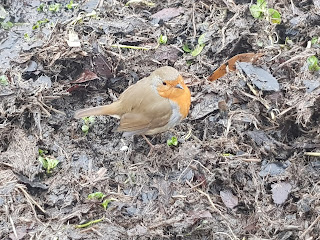 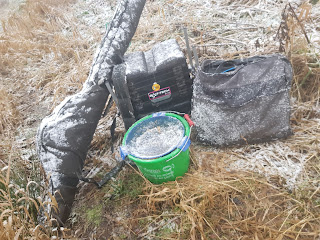 That short session out of the way we headed home and a good natter about the footie was had while we defrosted our baz.

With these written blogs beginning to develop some sense of organised and regular uploads it seems the written account of a session will go live earlier than the videos do so those who read the chub blog will be pleased to know that the video of that session is now available to view on the blogs Youtube channel on the link below.

Well its been a manic weekend just gone with three sessions on the bank, one a session for silvers where it doesn't go all to plan, a session for pike on Saturday and another estate lake trip for pike on the Sunday all of which will have videos made from them and also give me plenty of memories and content to transfer into written blogs.  Having a backlog when it comes to blogging is always good and even more so when trying to create both written and video blogs.

Looking ahead to this weekend i am  first hoping and praying the fish mobile passes its MOT and secondly that  the rivers sort themselves out so we can get some decent stick float sessions and wet a line with our baz for those river pike.   Catching pike is hard enough as it is on the river but having to make do with half hearted windows of opportunity it is very hard to build any type of campaign.

On to the session:

As most people will know with my blogs i don't really beat around the bush and i guess in life i am quite a black or white person, there is not much of that grey area.  In fishing as it is now there is certainly a section of anglers who feed of the work of others and simply go from angler to angler trying to prise information for their own gain with then no shame of then going and fishing these spots.  These "anglers" look at pictures people post and have Little interest for the beautiful fish in the frame in fact they almost certainly look past the angler to see the back ground with the only thought process of working out the where.

There is then the "anglers" who prefer the private message route where a flood of compliments is soon slowly and smoothly into a working out of where.  In my blogs i try and help people as much as possible and thankfully over the years blogging i have managed to get a feel for the genuine anglers looking for help and some great fishing friendship's have been born from these conversations.

For those parasites who are too lazy to actually work stuff out for themselves then the session below is what us proper real fishermen do week in week out to work our venues out, try it sometime you might actually get to feel that special buzz from catching your own fish than holding up others work ;-)

Saturday morning and all week rain had battered the UK leaving the rivers again swollen with chocolate milkshake like waters any slight break in the weather was seeing them dropping fast but with the ground, natures sponge, saturated even small downpours where seeing the rivers rising.  EA reports on Twitter all week had been awash with reports of officers clearing drains and debris to allow this water to get from land to see as soon as possible and reduce the risks of flooding.

Sat at the kitchen with a brew the arm on the clock struck 6am and before me lay a blank piece of paper upon which i began to jot down a few options for the day ahead.  A few lakes and canals made up the list and all had their positives and negatives for sure whether that was hard conditions or poor reward for the effort needed.  Grit and determination to understand a clear hard venue where a blank was a high possibility was my chosen destination.  Today we would spread the rods out and cover the ground fishing a hour in each swim before moving and cover as many swims as possible to find the pike. 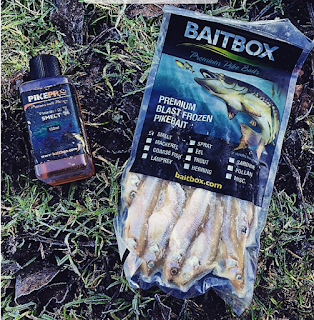 Tactics for the day was to fish a large herring jack on a running ledger rig in the hope of a big girl and then fanned either side of this would be my float rod on a skimmer bream and baz's on a smelt.  Arriving at the venue there was a gently left to right breeze and intermittent cloud cover which i hoped would build and give us the dark conditions this session most certainly needed.

The baits in position the waiting game began and the clock was set for a hour alarm.  In this type of scenario you have to be strict with yourself and have the mindset that an hour is more than long enough for any fish in the area to find and take the bait.  When i am piking i think pike are on you every session you go and i feel there are few session where in the hours you spend on the bank are spent when you cast in and no pike at all sees or investigates your bait.  The very splash is proven to attract the fish not scared them, just look at perch as a species they hear a plop the come to is as a signal food is there, its the nature of a predator and pike are no different.

The first swim passed by in no time and it was time for a move and swim two proved to be equally as quiet.  Moving into swim 3 i cast out the ledger and then both float rods went out.  The next action is of course to set the clock for the next hour move but so quick was the action we had no time.  Minutes after casting in my rod was away and striking into the fish it felt like a small jack, until it came close in and i realised it had wrapped on the line and was actually quite a nice pike and worth a weigh to see if it was a double. 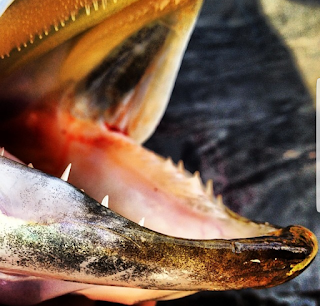 No sooner had i gone to lift the net than our harrys float was away a jagged take i knew it was a jack just by the violent turning, fishing a smelt any pike over 5lb would generally have no trouble in just eating the bait so i knew the violent turns probably meant it was a small fish.   Giving it a few seconds to finish turning baz set the hooks and played a pike of around 2-3lb into the net.  As i say on these trips, when you both catch it is the ultimate goal and two pike in the net we where made up. 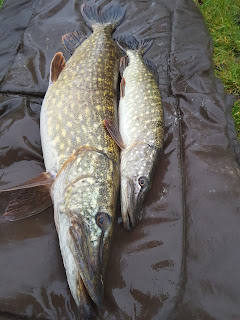 So nothing in 2 swims in 2 hours fishing then 2 in minutes from swim number 3 shows just how little these pike are willing to move to find your bait and how tightly packed in they can be.   Had we just stayed in swim 1 would we spent the day there and blanked?  I guess we might well have landed a new PB but in fishing that is the fine line we tread and two pike on the bank, for me, justified the decision to keep moving.

I placed my pike on the scales and was made up to see the scaled settle on 10lb, another double to the tally although i will have to check the records to see what number double it is, i think 15. A lovely pike with nice markings. 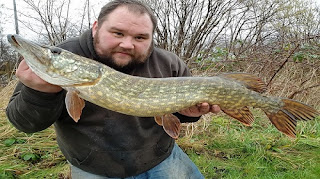 The pike rested and returned we gave the swim a good hour and half before moving again and with the clock edging ever closer to that 1pm pack up time we knew this was our last chance of a fish.  During the time in the last swim the weather really did change the wind got up and with it came a icy nip as a real hoolie began to build.  With presentation not being great on the float ledgers i knew my best chance of a fish was on the ledger rod on the bottom and to try and tempt a bite i changed it over to a popped up herring.

Like two expectant herons we waited for the fish to come but unfortunately time passed by quietly with only the sound of the wind whistling through the trees to break up the silence on the rods.  A tough final few hours on the bank but warmed by the fact we had caught two in very tough conditions we made our way home via the local Costa for a much needed warming hot chocolate.

A session that shows the value in getting out on the bank and covering the ground to find your fish and a few pieces of a jigsaw put together as next time we now have a good idea of where the pike are holding and who knows next time Mum and Son might be joined by their grandmother ;-)

A video of this session is live to view now below, please take a second to like the video and subscribe ti really does help the channel out

till next time tight lines