A week of heavy rain and at times hail stone had brought a brunt and definite end to the River and Canal campaign that had been going so well.  The river running high and chocolate was a no go and would be a needle in a haystack effort of landing near a pike where as the canal had that horrible grey sheen that screamed cold and dirty run off water form the local roads, both not good.  It meant a day booked off work with my mate Ste Daley saw us looking towards the still waters.

A large old English Estate Lake was the destination of choice and a venue we make a point of visiting once or twice a year for pike.  A venue that, for me, holds that sense of magic and mystery and a day where the saying “A Fish is a bonus” does really ring true!

The morning of the session and I stood in the kitchen brimming with excitement, a kid on Christmas eve like, I peered out of the window at the houses across the way with their roof tops glistening as the moons light shone though their icy crystals, a proper winter morning.  A quick coffee and it was time to delve into the bait freezer to pick out some baits for the day, smelt and lamprey had always done me well on there so  they went in and then I threw in a few change baits in the form of sardines and herrings and I swiftly closed the door on the freezer. I would be in the cold long enough today and I wanted to make the most of the warmth, even if it was only for a few minutes.

The car loaded and jack frost melted from the wind screen it was time to meet up with Ste and move all the gear into the van.  We began out journey to the bank down the winding narrow creeping country roads of the North West the head lights illuminating the path ahead with the occasional bunny hop as the van made contact with the uneven surface below.  The farmers fields either side studded with pools of white while the horizon glowed with that light blue haze that consumed the night stars as its feint rays reached their stubborn station in the night sky signalling the arrival of day break was not too far away.

We arrived at the cast iron gates held firm with their sandstone pillars that I guess have been there for as long as the old stately home situated within the grounds they protected.  The gates opened and unlike the black Friday chaos that was no doubt about to begin around the country this was a far more sedate and relaxed affair as we passed through the gates and down the dark path to the lake.  The track was flanked either side with all manner of variations of deer that stood alert and to attention, a guard of honour like as we passed through their wooded domain.

In the dark I made my way to the lake passing through the herds of deer that rested by its banks during nigh time.  The lake, huge and daunting, lay in front of me. A lake that offers the angler a huge challenge with its gin clear water, sandy and weedy bottom and bottomless depths off the shelf.  A place where your bait truly is a needle in 20 haystacks in comparison. 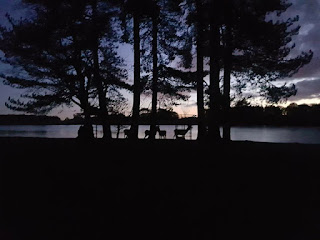 A gentle breeze blowing over my shoulder onto the lake had left a huge amount of calm flat water on my bank and in the dark pre sunrise light an opera of fish topped, first one, then another and another before the water almost danced with their activity.  On a water this huge location is huge and we knew being on these bait fist was key so we set our stall out to cover the whole area they where topping.

Your imagination just goes wild and you can almost imagine a hungry old pike stalking those shoals  meandering slowly though the weed as it does so almost lioness like with its belly hard on the bottom moving slowly as it keeps in touch with the herd only this herd was probably silver and roach shaped.
A three rod rule and in possession of a EA three rod licence it was time to take full advantage of it so out went a running ledger rig with a Lamprey offering and another running ledger rig with a smelt
and then a float ledger rig with a smelt on also.  A set up mirrored by Ste but with bigger baits on stes rods as we worked together to find out what they wanted on the day.  Normally one bait does well so we all move over to that although more than one run between us on the day would signal a good session.

All rods cast out the far bank trees caught fire as the suns inferno rose from behind the tree line, its orange wintery glow mottled through the trunks and entwined branches. 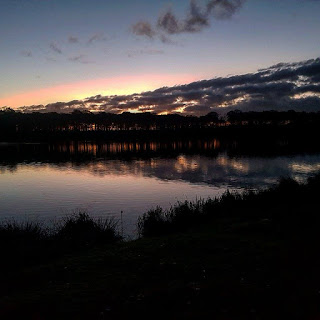 We sat back and made a brew and awaited the pike to take up their invitation to dine and true to form they stubbornly turned their noses up at our offerings.  A hole in my thermal wellingtons did little to brighten the mood and in an attempt get the blood going in my toes I went for a walk with the wobbling rod.  A few casts by the float rod and it must have awoken a pike deep down in the depths as my smelt bait moved away. A countdown and a hard sure strike to set the hooks was met with a violent volatile headshakes from the pike below its distaste for its predicament prompting it to go on long hard runs as it was coaxed up the shelf.  In a last ditch attempt to shed the hooks it surprised us all as it took to the air to try and spit free the trebles to which it was attached. 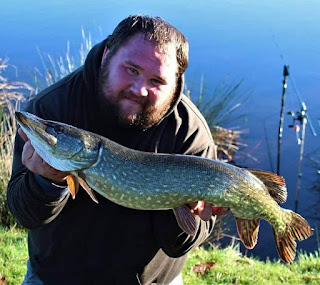 A sure hook hold and a beautiful olive dark green plump esox was on the bank, a little under 8lb her size was irrelevant as he flanks glowed in the winter sunlight.  A proper gem of a pike and as always any pike from this venue is a prize.

A pat on the back form Ste and we got the kettle on to make that all important celebratory brew.  A recast was in order on all our rods and we settled back in and had a good old fishing chat, setting the world to rights.  It was a good 2 hours later while recasting one of my rods the next bite came.  A screaming take on the ledgered lamprey section and boy did it go off taking line from the spool in an almost carp like run.

Feeling the line for those plucks I could tell the pike was well on its way, a short wind down and a hard strike to set to hook and my 2.75lb test curve rod arched over, a sign of a good fish.  In 20 foot of water it’s a fantastic fight and this pike was no different.  It kept deep and went on a series of long hard runs peeling braid from the spool as it did so.  Side strain applied I attempted to prevent it connecting with stes lines come 20 yards up the bank such was the hard run it went on.

Eventually she came up the shelf and in the gin clear water I could see she was a nice double figure pike, short, green and like a barrel she was a fit healthy pike.  On the scales she went 11lb9oz and I was beaming from ear to ear, my first ever double form the venue and it had been a day to remember!! 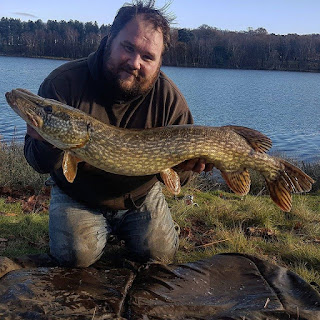 The rest of the session passed by without incident from the pike but for me the icing on the session was a group of stags we passed on the way back.  A session where I got to stand among some of Englands greatest wildlife and got to hold in my hands of  the UK’s apex underwater predators in them two pike. 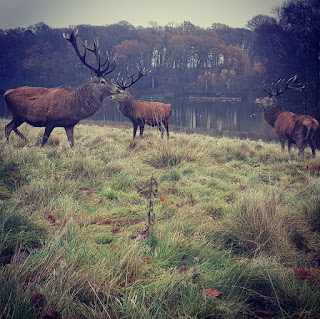 The Estate lake truly is natures theatre of dreams where special moments happen in a split second and create memories that will last a life time.
Till next time