This week I had a bit of free time on my hands so I sent a bit of time on the blog I have added a new page for the mini blog in pursuit of a 10lb plus carp, a page dedicated to the commercial venues that I fish and I also added a video to the still water venues section containing pictures of this week’s venue, Budworth Mere.

As mentioned above we visited budworth mere this weekend and the title of this week’s blog says it all we blanked spectacularly.  I spent the week researching this venue and I have to say information on the venue was thin on the ground to say the least and what information I did find was more carp related than coarse fish related.  The information all pointed to there being a big drop off around 30 metres out but it was possible to catch a decent amount of silvers on top of the shelf.

We set off on the day and my tactic was to feed a few golf ball sized balls of ground bait laced with maggot and a very small amount of corn with a pole fished maggot on the hook over the top.  I set up my pole to its full 13 metre length and left quite a long length between the float and pole tip as to not spook the fish with my pole over the top of the fish in the shallow gin clear water. 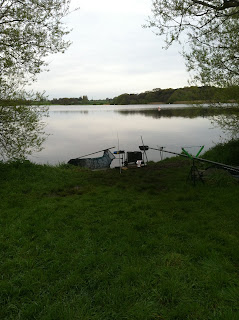 With reports of a few carp in the mere I thought it would do no harm to put out a sneaky sleeper rod baited with a boilie and a few crushed and whole boiles presented in a mesh PVA bag.  I put this rod out as far out as I could cast it and with a few fish showing my hopes were high for a few fish.   For a few pictures of this venue check out the link below where there is a video of the pictures I took on the day. 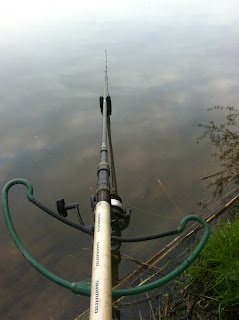 My sleeper rod out I settled on getting my bait out on my pole line and with 4 cad pots of bait going in I had laid the trap and all that was left was the fish to turn up for dinner.  There were plenty of signs of fish showing on the top of the shelf but all seemed to be two times the length I was fishing.  We both fished from 6am till 11am without so much as a knock but what a place to blank on as we were treated to a whole host of birdlife on the water from a really defensive mute swan to countless numbers of heron’s stalking the margins and also a sign that the warmer months are not too far away with the arrival over my head of a group of aerobatic swallows, the first of the year.

With the arrival of 11am a decision had to be made and it was clear we were not going to catch this close to the bank and the numbers of sticks sticking out of the water around 20 metres out suddenly hit home and this was obviously where anglers had been fishing by wading out to be able to reach the drop off.  We were not armed with any gear to fish up to our waists in water so a change of venue was needed if we were going to catch and we decided to nip to high legh to get a few pictures for the blog and then try our local pond where we were guaranteed some silver action and maybe even a rogue tench.

High legh fishery is situated not five minutes away from budworth and last year suffered a total fish kill when we had the really heavy snow and ice and rumours where before that the cormorants had decimated the silver fish.  Warrington Anglers recently reported they had stocked the fishery with carp purchased from Winsford anglers thinning of one of their lakes.  We arrived surprisingly to see three cormorants on the water which didn’t even spook when we looked around the water.   The pictures I took will be on the Stillwater sections sometime this week along with the cicily mill ones if I can get the old pictures form my other laptop.
We arrived at our local pond around 1pm and was son into some quality silvers on castor and maggot and the fishing was as good as I have experienced on any warrington water and best fo all it was totally free.  We both where catching fish at regular intervals and that’s when my uncle hooked into a fish that in the clear water I was certain was a goldfish but once he got it in revealed itself to be a golden tench!!  This small remote pond never ceases to amaze me in what surprises it throws up and today was no different.  We only spend around 3 hours fishing this pond and as you can see below we caught some quality fish. 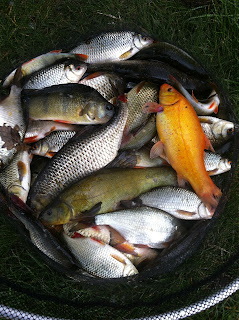 The plan was to save some of the bait for a trip out on Sunday but I awoke at 6am on Sunday to the trees nearly been blown over outside my house and torrential rain.  I have to say I turned over and enjoyed a well-earned lie in, it’s been a few weeks since I have not gone fishing both days over the weekend so I fully enjoyed a day in with the missus, in life you have to have balance and as much as it may seem I go fishing all the time you have to make time for those in your life that are important.

Till next time I wish you all