River Fest 2013 Date Released And A Fun Day Out

A warm welcome to this weeks blog update and as I promised in the previous update I bring some more information around the River Mania Idea of Dave Harrells.  First of all the name the angling trust have come up with for the competition is River Fest 2013 and here is the press release that was issued earlier this week with venues for the qualifiers and dates.

ANGLING TRUST RIVERFEST 2013 - WHAT'S IT ALL ABOUT?

A brand new competition, which will carry the biggest ever individual river competition first prize of £10,000, plus more big main list and section cash prizes in the final gets underway in July.

RiverFest 2013 is the brainchild of river expert Dave Harrell who has been working closely with the Angling Trust to put the competition in place. Twenty qualifiers of 60 anglers on various river venues around the country will see three anglers from each match qualify for a two-day weight aggregate final on the fish rich River Wye at Hereford on the weekend of November 2nd and 3rd 2013.

Dave Harrell said: “While it’s been great to see some big money events created on commercial fisheries over the past few years, natural fishing has been largely ignored. This new competition is an idea I’ve been thinking about for a while and it’s now going to happen thanks to the involvement of the Angling Trust.”

“The response to date has been fantastic as river match organisers from all over the country have come forward, keen to get involved with the competition. We’ve got 20 qualifying matches this year and it is the Trust’s intention to make the competition even bigger in the years to come."

"We gave a lot of consideration to the choice of venue for the final and eventually settled on the River Wye as it’s a place that lends itself to various skills and methods. We felt this was important, as we didn’t want to alienate anyone who qualified by putting him or her on a venue where they had little or no chance of competing. With a two-day total weight final as well this will make it much fairer for everyone to compete. The main target species in the final will be chub, barbel, roach, dace and perch and approaches will include both float and feeder tactics depending where you draw.”

“We are now actively looking for a sponsor for the competition as we have a lot to offer in terms of company, or product exposure and promotion. Any interested party is invited to get in touch with me through my email address at: info@daveharrellangling.comin the first instance.”

Mark Lloyd, chief executive of the Angling Trust said: “We’re all very grateful to Dave for spearheading the launch of this new competition and for helping us launch it so rapidly. It’s an exciting new addition to our match calendar and we hope it will recruit some new members to the Angling Trust to support our work fighting to protect fish and fishing and recruiting the anglers of the future.”

Please 'share' this on your own page and spread the word to your friends. And remember, Tuesday May 14th is the day that tickets go on sale!

There has also been a Facebook page set up on this link: https://www.facebook.com/AnglingTrustRiverfest

I was hoping to participate in this competition but looking at the venues on the list there isn’t a single river I have wet a line on.  I was hoping the River Dee or the River Ribble might have been on the list so I could enter a match with a bit of confidence.  The rivers above all seem to me like big fish rivers and with my river angling being mainly for silver fish like dace i could well turn up and draw the best barbell peg on the stretch and not know it sat happily fishing for dace.   I am going to give it a big mull over before the day the tickets go on sale so don’t be surprised if I change my mind.

On to this weeks fishing:-

For some time now there has been talk of my cousin and his mate coming fishing with us but each time the trip has failed to materialise for one reason or another but that changed this week when myself, my uncle Azzer, his eldest Alex and his mate Ric all decided to make the short journey to Flushing Meadows.  The angling experience ranged from my uncle who has been fishing for years to Ric who had never been fishing in his life before, we guaranteed him before we left he would be fed up of catching by the time 4pm came around.

We opted to fish the deep Marl pool at the far end of the fishery as there are only a few fishing pegs on here so by us spreading out a bit we would hopefully put off any other anglers and have the whole pond to ourselves.  I treated the session as a practise to make sure my carp rigs are working as I was lacking confidence in them due to the lack of runs on curlston mere so I decided to pretty much stick to fishing the carp rod on a bite alarm for the whole session.   My uncle was armed with a pint of maggots and luncheon meat and alex and ric the same and all had aspirations of catching a few fish.

We arrived at the pool and whist setting up was treated to the sight of a hare crossing the field behind us and upon reaching half way across the field it must have noticed our presence and it bolted for the hedgerows, I nnever knew they were so large luckily I managed to capture this video below.

I had a rig ready-made so it wasn’t long before I was fishing and Alex was not too far behind me.  The job of setting up Ric landed in my uncle’s lap and he set him up on a small section of pole to fish close in for some silver fish and in no time at all he had opened his angling account with a nice roach. 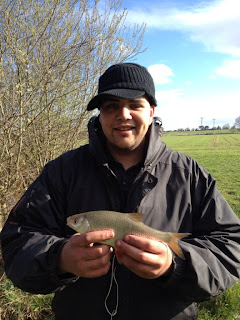 Alex was also not far behind him with getting a fish on the bank. 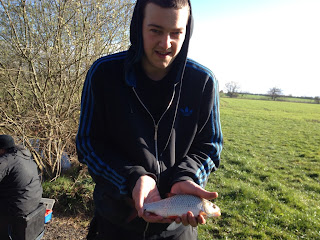 Both alex and Ric continued to catch these roach at will with Ric having a particularly “cracking” morning on Azzer’s newly shortened pole and Alex becoming more extravagant with his casting into, sorry close to the trees.  As the morning progressed so did the quality of the fish and Alex started to get into some of the smaller carp in the pool. 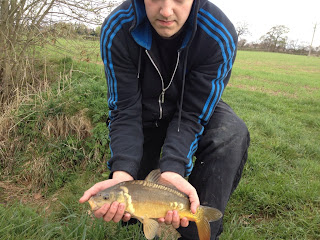 After setting ric up on the rod and also untangling Ric’s rigs my uncle finally managed to get in some fishing and picked up this lovely tench early on in the session. 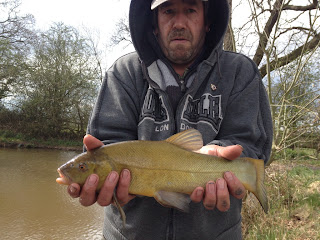 With all of us picking up some carp now Ric wanted to try his hand at trying to catch a carp so I sat him down on my peg and began to show him how to go about catching carp on the pole.  This is the first time I have showed anyone how to fish and I thoroughly enjoyed it from showing him how to set up to how to play this fish it was all good fun.  The swim ric was in had a big snag in under his feet so it was a real tough swim for a beginner to attempt to catch a carp from and together we proceeded to lose 3 carp to the snag but each time Ric picked up a bit more knowledge and was really learning how to play the fish and when to really apply some pressure.  The forth carp was not so lucky and with some really good angling Rick managed to land the best carp of the day and as you can see from the picture below he was over the moon and so was I, I never knew someone else catching a fish could give you so much pleasure. 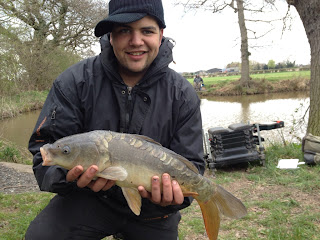 As the session continued all of us picked up more carp and I personally was made up that the rig I was testing out was doing the business and catching me some carp, I think I ended the session on 5 or 6.  Below are some more pictures from the session. 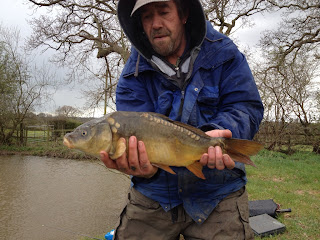 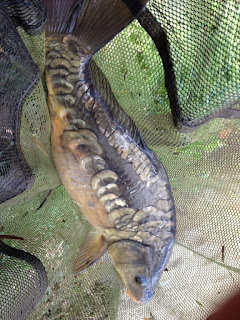 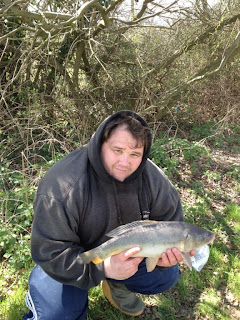 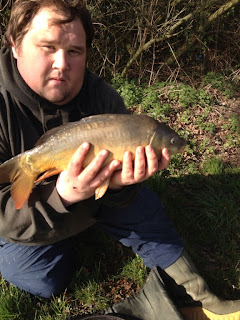 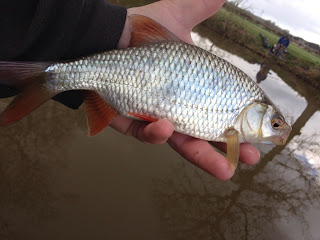 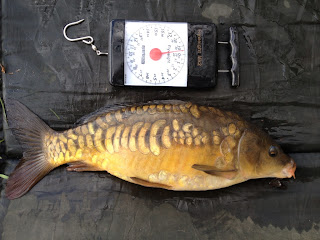 I can honestly say it has been a long time since i have enjoyed a fishing session so much the banter was spot on with everyone taking their fair share of stick (well maybe Ric copped the lions share) and a good laugh was had all round and to top it off plenty of fish were landed, great session and i look forward to the next one.

Tll next week I leave you with a sunset picture from a after work session this week in pursuit of the carp, no one can say I don’t put the time in! 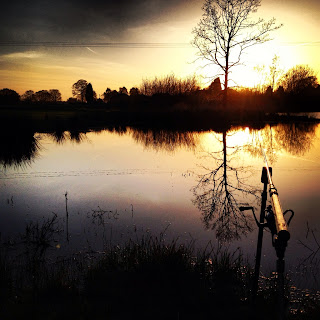 Till next week I wish you all