This week the start of the new river season has been occupying my mind alot, the thought of guiding a float down one of my favourite river swims trying anxiously to get the bait to flutter tantalisingly past a overhanging tree where a group of very large chub live had me daydreaming my days away. The reality is however the swims that were so worn in last year will have been reclaimed back from mother nature's three month grip upon arriving back and with all the floods last year the swims that produced so well last year may well look alot different now. 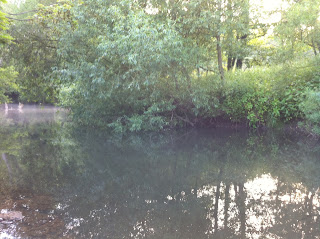 The opening day of the river season is always said to be one of great disappointment, likened by many to a world cup final, a big build up but in reality a big non event, i right now would happily take a repeat of last years sport on the opening weekend with me and my dad taking 16 chub in two visits to the river Dane. Fingers crossed that opening day luck will follow me this year on the river i decide to tackle, a decision i always make the night of June 15th.

On to this weekends fishing and there was only going to be one venue we would be visiting this weekend after the previous weekends big bag of crucians my dad wanted to have go on on the carp pool in wigan for himself.  A trip to Widnes Angling Centre on Friday to pick up the basics for this trip (pint of mixed maggots and some size 16 hooks) saw me purchasing a packet of artificial sweetcorn. This is a bait i have never used and i must admit i had little faith but i needed a smaller bait than my usual boilie's as i wanted to target all sizes of fish in the pool.  Also the fact that real sweetcorn is notorious for coming off on the cast and i needed to be confident i had a bait on the bottom if i was going to leave the rod to fish itself. 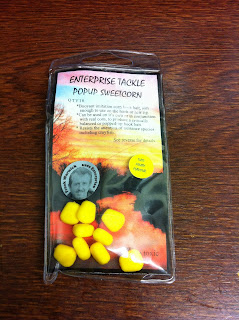 Saturday morning and we were up well before the break of day, the ever present flask of coffee was made and the gear loaded into the car and were on our way out of our street at 04:10, with a decent drive ahead of us my dad caught up on some much needed sleep.

With no cars in the lay-by's it was looking like we would have the place to ourselves and the pic of the swims,  unfortunately this was quickly dispelled with the sight of two umbrellas by the waters edge,  A quick chat with the anglers confirmed the comments made by the bailiff last week that the water did hold some decent carp and tench.

I set up in the swim i had fished the previous week and my dad in the one next to me, my tactics where exactly the same fishing my margin pole a few feet off the bank using maggot on the bottom and feeding small amounts of corn every few casts while my dad was going to fish the waggler in the open water again using maggot and trying to get the fish  feeding up in the water.  I also set up my sleeper rod armed with one piece of fake corn on a hair rig popped an inch off the bottom with a handful of the real stuff for attraction.

Its often said fishing is alot more than just catching fish and Saturday proved this, as i was setting up my pole rig the man fishing under his brolly to my right shouted over to me to look behind me, i quickly turned around and to my amazement there was a very a roe deer walking through the grass in the meadow behind me no more than 150 yards away.  When fishing i see so much wildlife and have witnessed some special wildlife moments on the bank but this was the best by far,  unfortunately i got so caught up in the moment i forgot all about my camera lying in my bag but i do plan to visit this venue again and after speaking to the guy who fishes there alot he said they are common place and if your really quiet they sometimes come to the waters edge to drink.  I will certainly visiting this venue again in the future so fingers crossed and i may even take a trip out there armed with my camera to try and get some stills, truly a moment to remember.

Shortly after the deer departed the scene the heavens opened and with it the temperature plummeted, looking at the water through the rain you could have been forgiven for thinking it was winter not mid spring.  The fishing was no where near as prolific as last week with small roach and tench being the only fish coming in the first few hours, it was a far cry from last week.  My swim seemed to be full of sticklebacks and every put in on maggot saw the float flying under for me to find one of these on the end, it got to the stage where it was getting beyond a joke and i decided to wait it out on sweetcorn.

It took a while for the bites to come but when they did it was a better stamp of fish with tench and Crucians making up the majority of bites which noticeably only came between showers. It was after one of these that my sleeper rod shot off and i struck into a better fish that didn't really have a chance with me using my powerful sleeper rod, it was only after i got it on the bank i realised it was on the fake corn. 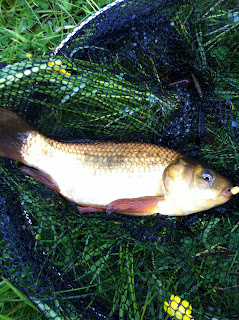 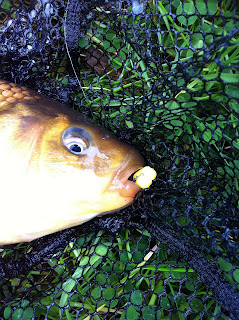 The fishing on the pole was slow but the fish were of a better stamp when they came and by 1pm we were both well and truly fed up with the weather and called it a day. With all the rain i found it difficult to get pictures of the fish as i was catching them so decided to just take a picture of the net at the end and a separate picture of the better fish we caught. 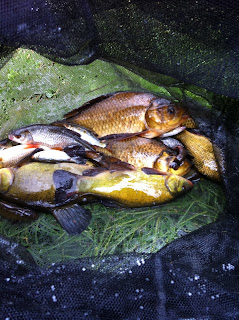 A few of the better fish: 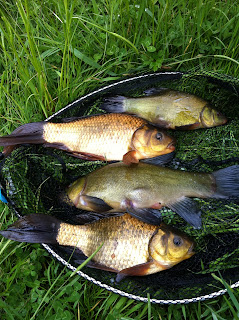 The sweetcorn defiantly counteracted the annoying sticklebacks and i think next time we go i will try sweetcorn from the off and pick a warmer day when i next target this venue.

Today saw me making my monthly trip to Stapley Water Gardens to pick up some gear for the forthcoming river season including the bait for me to target the chub and barbel on the river river Dee and Dane.  I have decided to go with an all pellet approach inspired by the time bomb method shown by Matt Hayes on the Greater Rod Race. 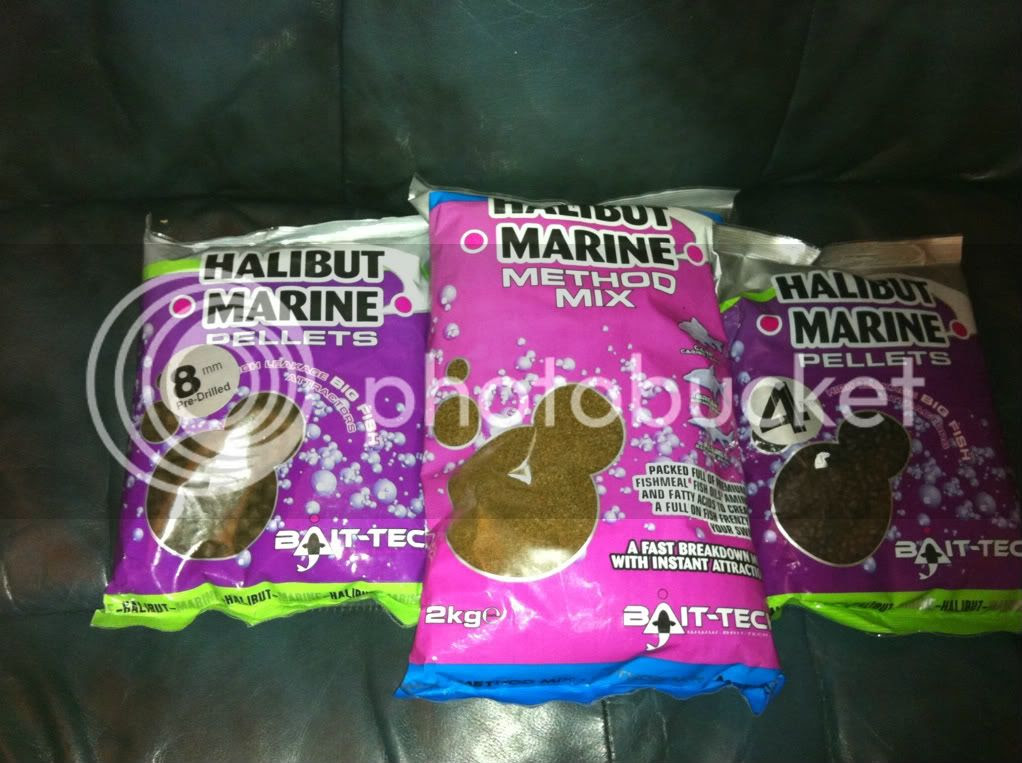 I of course also cant visit Stapley without going round the water garden centre to see the lovely marked carp they have in there, always worth the entrance fee and you can always tell who the anglers are in the crowd lol.

few videos of the carp they have:

Till next week tight lines