A warm welcome to this weeks blog update i hope i find you all well and your nets wet.  The written blog and fishing in general at the moment has taken a bit of a back seat with me taking some time off work.  This is of course the wrong format to be going into any detail on but its safe to say that the motivation just has not been there to sit in front of the screen and put a written blog together.  The main reason is to be honest content, to the point of going off work i had done quite a bit of pike fishing and i had accumulated quite a bit of video content to keep the pike blog and the youtube side of things ticking over with a weekly video.

The main blog did suffer a little as the last session before i went off work was a session on the river where i went all out for pike but the silver fishing of side was really poor so it really did mean the fat reserves for a fishing blog just was not there.  With blogging it is always good to keep things ticking over so in this update i will be doing a bit of a recap on the piking and where i am up to.  Luckily i also had a good session for pike before i went off where i had a real red letter day for them.  The pike diary is good but it does make blogging red letter sessions in detail really hard as the real estate on the page is not great.

With that all said lets get into the update:

Well its safe to say the pike season hit the ground running and it has seen me have some good success chasing the old esox.  As it stands now i have caught 48 pike with 7 of my target of 10 doubles on the bank.  It has been a solid start to the campaign but with November being a but of write off with me being off work then progress will slow and right at the wrong time really with November being a great dead baiting month.  Such is live and i am sure i will be making up for lost time when i get back into work with my new leave year starting next month.

So the piking vlog is coming along well I'm comfortable speaking to the camera and its getting to a point where my editing is becoming easier as i learn the package.  I can also see this video logging being part of the angling year now out side pike fishing with sessions on the canal and river being a real possibility.

There is already plenty of content on the youtube page with some dedicated tutorials and actual sessions on the bank.  For anyone looking to save money with their fishing then piking is a great way to save money and a huge part of that can be making your own pike traces.

There is plenty of content coming on the pike blog as we are a few weeks behind but there have been some lovely pike caught so far, not least this lovely 14lb pike. 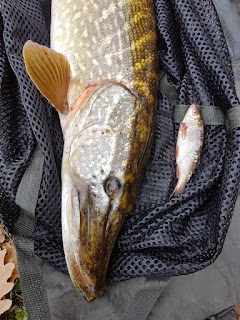 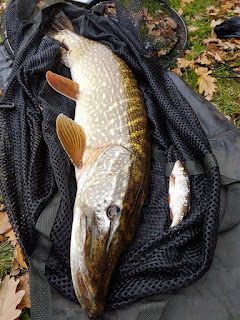 A early start on the river and driving through the lanes in the dark i was optimistic of catching some pike as the forecast was for plenty of cloud cover and there was a nice nip in the air.  I of course got stuck behind the slowest of slow tractors heading there so it was already light when i arrived on the bank.

My tactic for the session was my trust paternoster live bait rig and setting up in a swim i had caught some pike in recently i was confident of a bite or two.  The sun rising over the river revealed the river to be in fine fettle with plenty of clarity for presenting a bait.  A good two hours in the swim and the rods remained motionless, i say motionless they or course dances to the live baits erratic tune.

A change was in order as it was clear the recent drops in temp had pushed the fish from the area.  The beauty of pike fishing is how simple and quickly you can pack in a move.  A ruck sack, two rods, two bank sticks and a landing net meant i was soon on the road to a new location.

One rod in i set about plumbing up the depth for the next one and i was soon presenting two baits in a new spot, a quick turn round and my first rod had gone and line was peeling off the open bail arm.  A strong strike and the rod hooped over straight away, a sure sign of a ok fish.  To this point i had caught two doubles and quite a few jack pike so i was pleased of the hard fight from the first fish.  A hard fight later i was pleased to slip the net under a 10lb 7ox pike, a great start. 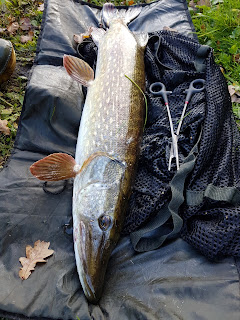 The pike returned it was a great start to the new spot.  Of course the fish was rested in the net before releasing her back to her home and it did seem like it was only seconds after releasing the pike that the rod went again.  This time a jack just under the 6lb mark. 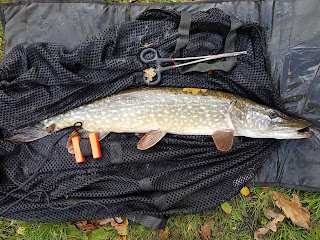 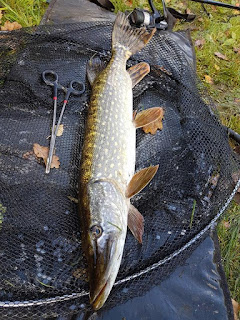 A nice break in the action allowed time for me to grab a warming brew and i was visited by a friend i have not seen in a while and it was great to catch up on our angling adventures since our paths crossed last time.  A good angler and it was great to see some of his angling pictures form recent silver fishing ventures.  Of course being the good man he is he also gave me a few pointers about potential other hot spots to try and the river in general, all of which i was grateful for.

1.30pm till 2pm brought on another flurry of activity with two lost fish and two more small jacks on the bank with a 5lb14oz fish followed up with a 5lb on the nose barrel of a jack pike. 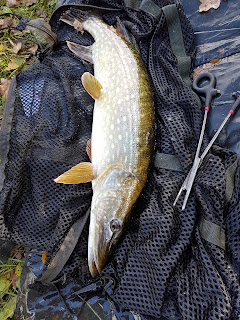 Moving into the last hour the light levels really began to drop rapidly and with it so did the temperature.  Stood watching the floats i knew it was only a matter of time before the float went.  The odds so stacked i the favour of the predators they just had to be on the feed.  You could feel the tension building and hard flurry's by the baits gave a sign that something was about down deep.

My feeling was right as the right hand rod slid slowly away, a slow take that was so different to the other jack takes and i let the run develop before setting the hooks.  The reward a nice conditioned 9lb pike 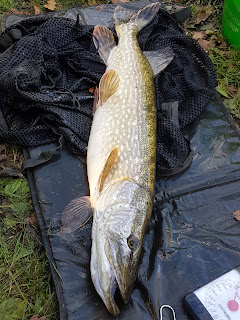 The fish back the last half hour of the session was upon me and it was a session that passed in the blink of an eye.  I know there was 40 mins between takes but it did not feel like that to experience it, it felt like it was manic.  The time for the slow pack away had come and i was fresh out of baits baring one roach.  I decided to slowly pack all the other gear away and spent 15 minutes with just the one rod out.

Reaching for the rod it was time to call it a day and as i reached down i caught the float disappearing out of the corner of my eye.  Another slow take and striking i knew i was into another nice pike.  A hard fighting pike had me on all types of runs as line oozed from the spool.  The fight was a good one and up from the depths came a dark green shape of a lovely pike.  A double for sure and i thought around the 13-15lb mark.

On the bank she went 11lb and i mist admit i weighed her again and low and behold she was 11lb she just looked a lot bigger. 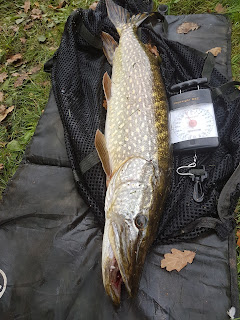 A cracking way to end a nice session with two doubles and 7 pike on the bank i left a happy angler.  At least the fishing was going ok and providing a space for solace away form the troubles developing in work.