A warm welcome to this weeks blog update i hope you are all well and your nets wet.  A few days left till i go back to work and i can honestly say i am dreading the thought of being confined 8 hours a day really doesn't fill me with the joys of spring.  A few trips to the bank before then hopefully will give me enough stored energy to survive till the next fishing trip.

On With This Weeks Update..

I would just like to take this opportunity to wish all the people who read my blog and follow my adventures online a Happy new year and the tightest of lines for 2017.  It has been quite a good 2016 for myself fishing wise.  I ended the pike season with a nice pike then launched a mini series on fishing the local canal which has been well received and then spent some magical trips on the bank with my little daughter catching her first few fish.  Summer days chasing carp on bread and corn and then autumn roach sessions on the river have all made a fantastic years fishing.


From the fishing blog point of view it has been a year of steady increase with numbers of views each month on the blog rising to record levels, facebook and twitter continue to be increasing and more importantly is becoming a place to share your adventures more and more which is the reason i set it up and then towards the end of the year the launch of the blogs youtube channel which has added a whole new dimension to the angling blogs.

It has been great over the year to work along side some fantastic companies such as Octoplus and Stinky Stuff to name ones that really stood out and i cant wait to work with these again in the coming months. 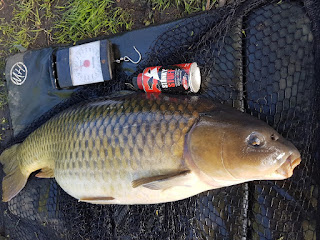 Looking to the future and what it holds for the blog and my fishing i can honestly say i am as excited as ever for the adventures to come.  This year has been far from easy on the new cards we are on but in the coming year it has give us a huge bed to build on from.  There are a few irons in the coals with little product reviews and possible opportunities and i am excited to see where these lead but the plan for this year is to be a lot more proactive with the blog and maybe tweak the updates to be more informative as to how i fish.

Any feedback on if you like it how it is now or changes you would like to see let me know via email of private messages it really is appreciated.

A few weeks earlier we had visited this venue and been met with a hard overnight frost.  If i remember rightly the temperature was minus 4 when we arrived and did not get over that all session.  The fish where still there on the feed but with line freezing on the reel never mind the rod rings it meant once the fish moved out of pole range i was a little stuck with chasing them.

A video of the session is here:


In keeping with this mad winter we are having it was only a week or two later we where again on the same pegs and where met with temperatures more like spring that early December.  Basking in the early morning warmth we set about sorting the gear out and the river looked in fine fettle after rain a day or two ago she was carrying plenty on colour but more importantly the flow was steady.

A six number four stick float fished shirt button style down to a Bayer Perlon hooklength of 1lb.7oz line to a size 20 hook was my set up for the day and it was a test for my new drennan acolyte.  When people say test you automatically think about if the rod can haul big chub out of rivers, that is all to come, but for me i wanted to test how light the tip and action was for small species like roach.  This for me is as important as the power the rod has and will be more so when i try it out on the canals in weeks to come. 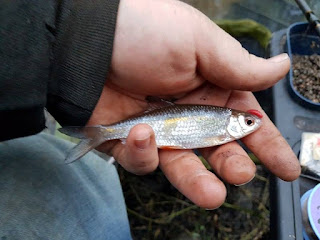 The swim was an even depth along its length and the key here is to feed the swim right to keep the fish where you want them down the swim.  The last thing you want on the stick float is the fish coming right up to the feed in front of you.

Hemp seed as a holding bait and red maggot on the hook was my plan of attack and that all important first run through the swim of the day thankfully brought a fish, always the result you want on any session! 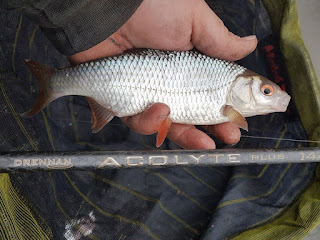 My confidence in this rod was increased in two casts with the small roach not being bumped and the second fish being a few year sizes larger also being well hooked and played on the rods forgiving tip action, but with the power to keep it from the safety of the reeds.  It was starting to become a rod i was loving using.

My previous rod a 4 piece korum float rod had also been a rod i had enjoyed using and still do from time to time but this drennan acolyte was i have to say starting to show its extra worth when balanced with my shimano reel.  Trotting where you cant feel anything in your hands is a weird sensation indeed.

As with all fishing the swim builds over time and picking up steady bites from small roach soon turned into steady bites from better roach as they bullied in on the action.  As with all fishing its all down to the way they want it on the day and on this session it was held back just after the hemp seed, let the line go and boom under the float went.  The 6lb net from a few weeks ago was surely going to be beat today as the stamp was so much better. 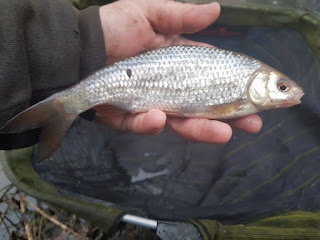 As the session went on the fish did back off and i had to chase them down the swim but in my heart of hearts i knew better roach where around so i decided to give hemp seed on the hook a go and was pleasantly surprised as after a few trots down i was rewarded with a cracking roach, my first ever on hemp seed. 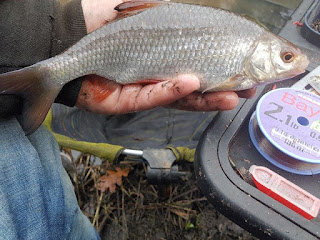 After this fish the fishing went from strength to strength and it was good fishing until we packed in. We normally call it a day around 3pm and start the pack up but it was well on to getting dark when we eventually packed up and although we had no scales we both had  double figure nets and a great day was had all round. 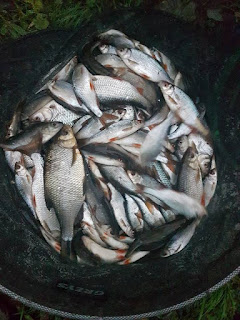 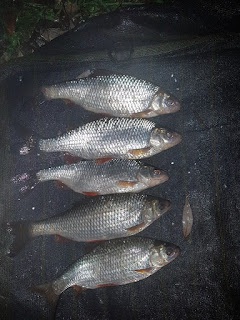 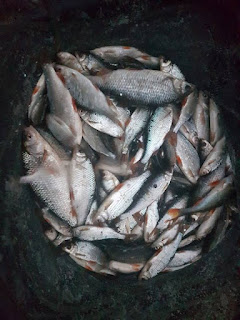 A video of this session is now live on the blogs youtube channel here:

Till next time i wish you all