This week the blog’s email address went into overdrive with numerous readers contacting me with regards all things to do with fishing and I would just like to take the opportunity to again thank all these people for taking the time and effort to email me, it really is great to hear from readers of the blog on their thoughts of the blog and any questions they have on the fishing I do.  These nice emails about the blog and helping people with their questions are something I really enjoy and look forward too come a Sunday afternoon and thank you all again and as I said on all my emails let me know how you are getting on its always great to hear about other peoples fishing adventures!!
“The River Severn a Whole new adventure!!”
For some weeks now there has been a air of certainty about our fishing the River Dee has been very nice too us for the past months while I have been nurtured and schooled in the art of trotting by my uncle, when I got my technique and presentation right she would gladly reward me with one of her prizes to show me I was doing it right and when I wasn’t there was no compromising all culminating in the feeling that we knew barring the river having a really off day we would catch a few fish.
After our last adventure on the River Dee last week we decided on the way home that no matter what we where going to try a new river for our next outing.  The first river we mentioned was the River Wyre at Church town on the angler’s card, a place I had fished a year of so back and had a really mixed bag or chub, dace and trout on but had never been back due to the distance it is away from my home.  The rest of the week up until Thursday afternoon was taken up rigorously scouring the internet for any scraps of information on how the river was fishing and what species it could contain and we where all set ready for a trip there on the Saturday.
A chance meeting between my uncle and an old friend talking about old times changed all that and our venue was changed to the River Severn, a quick check on Google revealed the river to be around 45 minutes drive away but with the majority of it being motorway and dual carriageways it was a simple route down to the banks of the river.  A day and a half is never an ideal timescale to put together some information on a new stretch of river and even if it had been a new section on the river Dee I wouldn’t have felt comfortable never mind a completely new river all together but with weeks of delightful fishing behind us we had nothing to loose and after a final get together on Friday night all the gear was ready and the bait prepared and like children on Christmas eve we both wished the night away.
There would be no need for alarm clock on this most energetic of mornings long before we were due to meet up I was up ready waiting for the clock to signal it was time to set off, last minute checks on gear was made as leaving something behind was not an option on such a long trip and I passed the time by checking out some of Stewart Bloor’s journal entries of his time on the Severn and this only fuelled my excitement of the unknown which lay ahead.
Eventually the time came and with a fully laden car we set off on our new river adventure with not a clue what lay ahead of us or what type of river we would find at the other end, would the banks be bad?? Had we picked a stretch devoid of fish?? where what occupied the conversation for the first part of the journey as we passed by our home river the Dee but apprehension soon turned into optimism as thoughts of bags of dace and monster chub where voiced as the hype train reached a crescendo.
The drive was although quite long a nice easy drive and before we knew it we arrived at our destination and we quietly unpacked the gear from the car and made our way over the usual obstacle course that is present on most stretches of river we fish, barbed fences, gates and styles all present challenges to the modern river angler when trying to get to the river banks and after a short but eventful walk we got our first glance of the mighty River Severn. 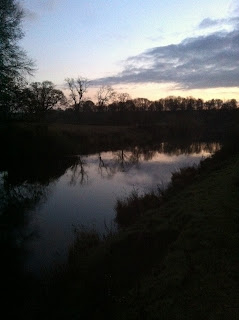 The light was dim but from what we could see the river looked like a dream to trot with an even flow all the way across even under you feet and it was running at a steady pace.  We decided to walk the whole of the stretch before setting up in the first place we saw and to anyone thinking of fishing the Severn the banks are not for the faint hearted, very steep and muddy once you are at water level but once you are at water level I found the ground to be more than manageable and easily found a comfortable swim but be warned the river is as deep in the edge as it is all the way out a place you certainly don’t want to fall in.  We settled on the swims towards the lower end of the beat and hastily set our gear up and I admit to being a little over excited and I think it took me longer than ever to set up!! 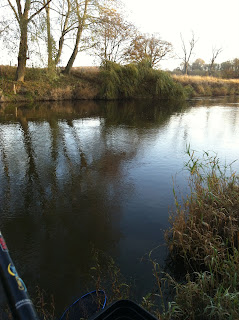 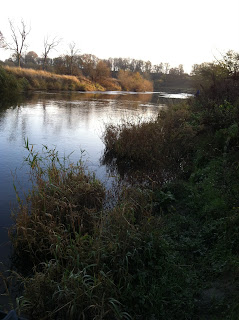 As the day broke and the first rays of light began to creep through the gaps in the trees the true beauty of this river became apparent, she looked in top nick and without a breath of wind how could be not catch.  In went a few handfuls of the magic mix and it was time for my first trot down the swim.  The float traced a arrow like path down the river and at a glorious steady pace and right where my hemp was the float went under a quick strike was met with thin air and after another trot down it became clear you couldn’t fish over depth as with only an inch on bottom the float would get pulled under, a quick change of depth and it was back down and this time the float went through un touched and for the first two hours I was set in my trotting rhythm of feeding, running through in front of the feed and reeling back in as time after time the float just went down untouched.  Numerous changes where made to depth, shot pattern and bait but with the same result and by 11.30 I was to tell the truth stumped!! 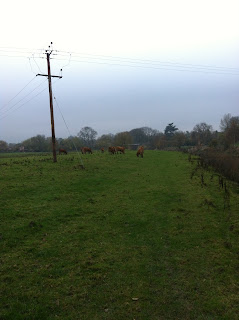 A quick look down stream showed my uncle to be in the same predicament and a visit to his peg was well over due, scaling the bank showed why the barbed wire had been necessary as the field was now populated with a small herd of beef cattle that as soon as they spotted made fast tracks in my direction and by the time I had got back to my peg they were now looming large on the top of the bank. 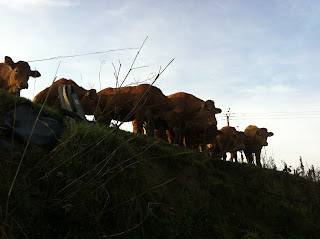 My dad as many will know isn’t the best lover of these animals and began to try and move them on long the bank armed with his stern voice and landing net pole the standoff began!!.My dad as much as he wanted to move them was having no joy and as he approached they just held their ground so much so they got their own pet names from my dad, the leader of the herd, “sirloin” was as stubborn as they came while his side kick “oxtail” was on his shoulder backing him up, of course my dad used these names when addressing them, politeness is everything. 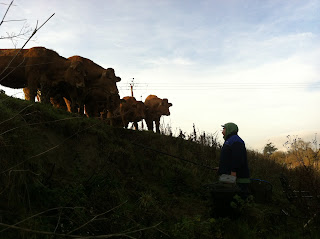 Something needed to change and that’s where my no nonsense approach came in and a quick wave of the arms and walking towards them saw them moving on along the bank and to be honest apart from one other occasion they left us alone.  As normal with my visits to the river of late a pair of swans again managed to seek me out and the following pictures of these swans shows how high the banks on this stretch are. 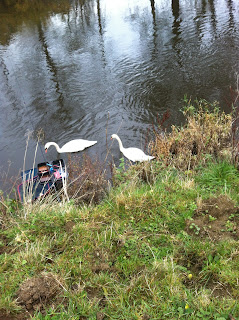 The day didn’t get any better from my point of view, my dad had a few bits on the feeder and my uncle had a few small dace trotting but it really was a labour of love and the hardest days fishing I have had on the river.  As the day wore on it became apart that something was really wrong on this stretch it just seemed devoid of fish, that was till a shout from down the bank from my uncle stating he had just been snapped from what felt a big fish.
The next hour passed by and the weather really clouded over and almost an hour on the dot another shout came from my uncle and this time the fish was on, I rushed along the bank with my landing net and camera and could clearly see whatever he was connected to was really big with his trotting rod bent double, the fish kept deep and just wouldn’t come off the bottom and with one quick dart went from the middle to the inside edge and straight into the bankside vegetation and came off, whatever loomed here was big!!. 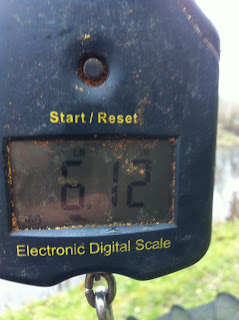 My uncle set up again and I returned to my fruitless swim and just on the verge of packing up my uncle again hit another fish that like before kept deep and was not budging at all.  My uncle, fishing with a 1lb 7oz hook length and a size 20 hook really was odds on to loose another fish but being the good angler he is played the fish really well and every move the fish made he countered with just enough pressure to convince it otherwise and the battle was well passed the five minute mark when he finally managed to bet the fish up towards the surface where a flash of white lips gave the fish’s identity away and with that turned hard for the bottom. Knowing what was on the other end now eased a bit of the pressure and my uncle began to apply a bit more pressure and the fish came up to the top and I took my opportunity and scooped it up first time.
The fish was by far the biggest chub I had ever seen on the bank, it was as thick as a breeze block and as fat as they come a monster of a fish in my eyes and a definite PB for my uncle who’s previous best was a baby compared to this at 3lb 5oz.  The following pictures of my uncle holding it don’t do it justice but I think the pictures in the net show its true size. 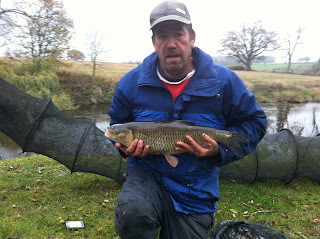 We left for home not long after this capture due to it being such a long drive home but both earmarked the stretch for future investigation later on in the year and although I had a poor day myself I was really made up for my uncle who to top it all off celebrated his birthday on Saturday and what a birthday present he got!!
Next week will see us back on the River Dee as I’m in desperate need to see that float sinking again, let’s just hope she is playing ball and I don’t go home with another Blankety Blank cheque

till next week
tight lines
danny
Posted by Danny at 19:22