Silver fishing on the River Dee at Farndon....

After around two to three months of fishing both Saturday and Sunday continuously I purposely decided early on last week that I would only be fishing one day come the weekend to one, give me a little break and two to catch up on the mountain or errands that have crept up over the weeks and to be honest as we delve deeper into winters grasp there will be a gradual decline towards a one day a week approach which isn't anything new in my angling year but will have an effect on the blog in that the updates will not be as long as normal, obviously as there is one day less to report on but this will not effect the frequency of my updates which will continue to be posted weekly.
With that out of the way lets get onto this weeks fishing:


I recently got asked in an email from a regular reader of the blog, who contacted me via the "contact me"  page on the blog, asking if I had any tips I could give him regarding river fishing and  I replied with tips on what to look for feature wise and what rigs I use etc but I thought I would share with you the biggest tool in my armory as a river fisherman and that is the Environment Agency Water Level site found here http://www.environment-agency.gov.uk/default.asp.  This site gives you the current level of the river at certain points along its course and if you are lucky one of the water stations will be situated at your chosen destination like mine was this week.  Studying this chart before and after you go fishing you can get to learn the river you are fishing and how catch rates and conditions change in relation to the water level and whether or not the river is rising of dropping after a recent down pour, it also will save you a lot of money in petrol as you can see before you travel if the river is in flood and unfishable, a brilliant source of information.

Saturdays destination was dictated by the weather and with high winds and rain due this weeks destination would have to be easily accessible and easy to "batten down" against the weather on.  One destination sprung straight to mind and that was Farndon and that is where we headed for.As I said earlier this stretch has one of the environment agency water level station situated on it and it was this graph I monitored during the week and is shown below:

As you can see the river was carrying around half a metre of water which considering the amount of rain we have had the past week was about right and as the river had stopped rising when we were due to arrive on Saturday morning it meant we were in with a good chance of a few fish.

The river Dee at Farndon is well known in angling circles as being a top dace and pike venue in the winter months and to be honest I thought we might struggle as its a venue I usually leave till a few weeks after the first frosts of the year to visit but after our success of late on the river I was really optimistic. 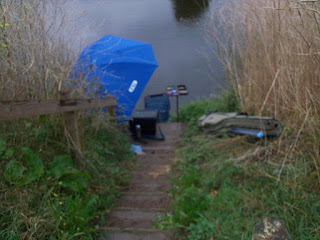 We arrived at the river quite late on Saturday and it wasn't until the local church bells rang 8 times that I made my first cast.  As you can see the pegs at farndon are really sheltered and ideal for getting out of the wind.  This cover though will eventually die away to the point where you will be bale to see the person fishing the peg below and above you, good if your catching but soul destroying if your not and they are.
The church in the distance: 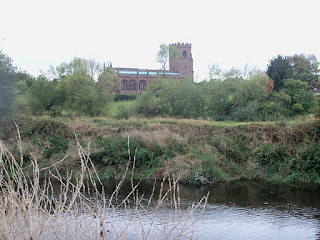 My past visits to farndon have not been the best to be honest I really find it difficult when trotting swims over 7ft deep but in the past few months I have done more trotting and I set myself a target of just getting a few fish throughout the day but making sure I was accurate with my hemp and bait placement to get as much practice as possible in preparation for when the river is deeper in winter.
The swim I chose had a sunken tree at the end off the run which would stop re running the float down too far and also had a sunken tree at the top of my swim that would help me get my bait going in consistently at the same spot.
Few pictures of  the swim:
Upstream tree: 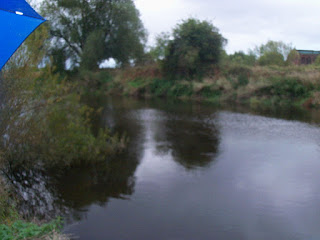 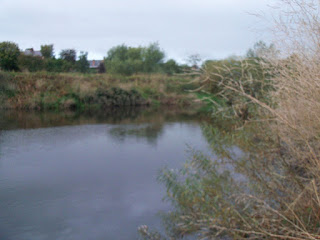 As you can see on the bottom picture the downstream visibility was really hindered by some bank side vegetation hanging out over the river but this only really became a problem if I trotted down past my bed of hemp.  My bait for the river was the same as any other week with maggots, caster and hemp making up my line of attack. 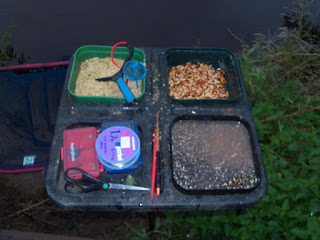 The day that was forecast to be wet and windy lived up to its name for the first twenty minutes at least as after that we were treated to flat calm conditions which came as a real surprise to say the least.  My uncle was the very next swim up from me and to say he got off to a flier was an understatement as every few seconds the peaceful noise of the world going by was broken by the unmistakable sound of an angler striking into fish and from the sound of it he was doing very well indeed.
From my peg's point of view I made a slow but steady start and although my bait placement was spot on I was struggling with smaller fish, the bait was coming back battered but there was no indication on the float to show a bite, a change was needed and I scaled right down and manage to fish with some regularity and all over my baited area how I had planned and got to the stage where even if I hadn't caught another fish for the rest of the session I would still go home happy.
During the morning I had a regular visitor to my swim in the form of a majestic swan that elegantly moved from angler to angler picking up any bait that had fallen into the margins, it constantly amazes me how close you can get to the birds on the river its almost as if they know the anglers pose no threat to them and it was a real privilege to get so close to this beautiful bird.
Visitor to the swim: 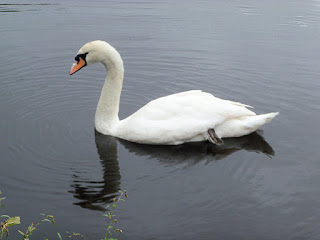 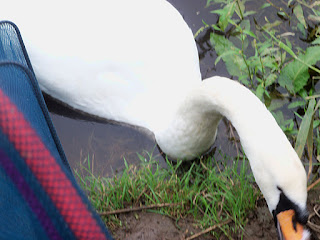 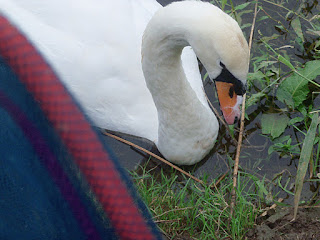 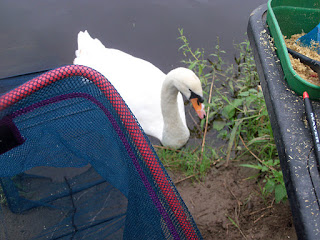 The swan game and went throughout the whole morning just like the bites from the fish came and went from time to time although it never seemed to be the case from my uncles point of view who had set a target of 20 fish for the day when we first arrived, such a target now seemed silly as it was easily passed after the first hour.
I did eventually get snagged on bottom which is par for the course when fishing the river, days where it doesn't happen are few and far between but rather than get annoyed about it I always take the opportunity to take a few minutes away from the peg.  I would normally go for a quick wander to see what wildlife was about but there was a masterclass on how to trot a deep river on the peg next to me and it was like poetry in motion to see how methodical he is in catching fish and like all things when done well made to look very easy.
Full of enthusiasm I returned to my peg and put in to practice the little changes I had seen moments earlier with instant effects as my catch rate increased dramatically for the final few hours of the session.  The river was not being kind to everyone it seemed though as this picture below shows, a car park that was full when we set up was eerily empty, a sure sign not everyone had fared so well. 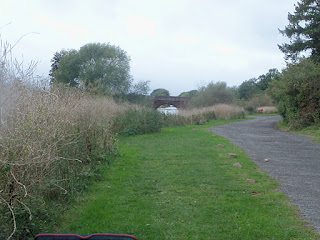 The day, like all good days on the bank flew by in a blur and it was over all too soon and we were both still catching right up until we had to call it a day a 2.30pm.  It is one of the hardest things in the world to leave a swim whilst you are still catching but when the time is up the time is up and we both met up to compare our catches.
My bag shown below is by no means the heaviest bag of fish I have caught from the dee but that net of fish below meant a lot more to me than any other bag of fish I have ever caught on the dee before as it stands as a marker of how much my trotting has come on.  A year ago I fished the same stretch and caught a seven fish trotting in the whole day and left so dejected I only ever fished the stretch on the feeder there on after so this bag of fish marks a real landmark for me on my continued apprenticeship on this mighty river.
my bag; 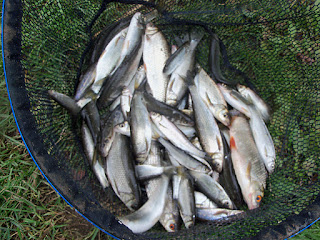 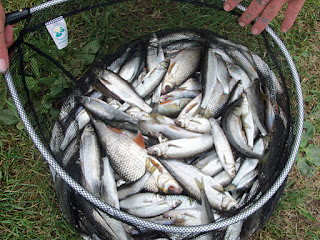 As you can see my uncle had a cracking day on the river and what was really good about the bags of fish they had all ages of fish in them from this years fry to well established fish approaching a pound all good signs for the future of this river.
Next week will see my back on the river again and after this weekend i cant wait to get back on the bank and do it all again!!
till next week
tight lines
Danny
Posted by Danny at 22:08