A week on from posting that you can now follow the blog on twitter by adding @satonmyperch I can report that so far it has 12 followers which for a first week is not bad at all and well surpassed my expectations and I must admit I am really enjoying exploring this new community of anglers that exist on twitter.  Such a vast array of fishing all come together on this great tool from carp anglers to maggot danglers there all part of this network of anglers and also what a great avenue to contact and follow the more well known anglers in our sport like Martin Bowler and Steve Ringer who regularly give out some great hints and tips.

The cold weather last week tried its best to grab a firm hold on our country and for the first few days of the week it looked like we where certain to experience the first frost of the year by the weekend.  The mornings where ice cold and the early morning wind had a real chill to it, great I thought and long may it continue as this would see my target silver species shoal up and become easier to pin down to where I want them and also it would see some of the big pike start moving into the deeper areas of the river as they follow their prey, the shoals of dace.

The cold weather though was only a brief visitor and by Friday morning the barometer had certainly risen a few degrees as I made my way into work, my head full of excitement for the weekend to come and as ever optimistic for the challenge ahead.  As always decisions had to be made about which venue we where due to visit the next day and after great deliberation we decided against the River Dane and chose to again visit the River Dee and what a great decision that proved to be.................

The River Dee at Farndon was the chosen venue and with the river carrying a bit of water and having a tinge of colour to it I knew we where in for a good day.  I set up in a new swim to last week for a change of scenery and just before I started to fish I took a picture of my bait tray and my method of attack, some things never change. 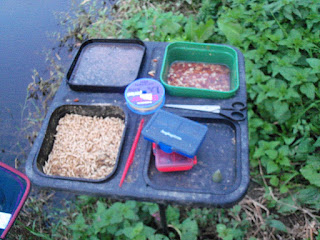 The peg I chose to fish was in essence a silly peg to have chose given the high winds that where forecast due to how open and exposed it was but I just had a feeling about the swim and decided to bite the bullet.  My uncle set up a few pegs upstream which meant I was on my own tactics wise and it was up to me to put into practice all I had been taught by him over the last few months on the river.
the swim 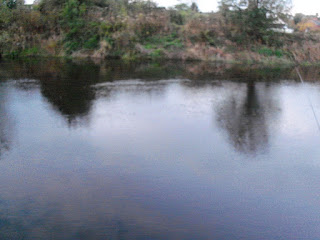 As you can see the swim was really exposed and to be honest was a peg I should have walked past as when we arrived we had a choice of all the swims on the beat.  All set and ready for the first cast of the day I got speaking to a few regulars and they explained there was a match due on the other bank later on in the morning, Great!! I though as this usually meant for me a day of sitting without a bite while the match length caught an endless amount of fish, but that was then and I thought to myself how far I have come as an angler since then and it was time to put it all into practice.
To be honest there is not a lot I can say about the fishing other than it was a dream session I caught fish from the off and for the first hour I was catching quality dace every cast and boy did it feel good.  The fishing was how you dream it to be with the fish coming at the same spot down the run every trot down as my bait reached to point when my free offerings where hitting the bottom.  The fishing for the whole session was first class with fish coming steadily for the whole time I was there.
The wind obviously had a say on the proceedings and made bite detection really difficult at times but even after three hours I knew I had already had my best day ever on the Dee and could not complain one bit.  My uncle visited my peg and was also having a good day on the stick float but was also having some real trouble with the resident pike with him having two fish taken on the strike and even hooking one pike for a few minutes before it bit through the line, good signs for my pike quest and from this week I will be putting out a sleeper rod if the swim I am fishing allows it.
The session like all good things came to and end far to quickly and it was time to see what was in the nets, we started with mine and I knew it was something special, for me at least.  Lifting the net out it felt like it weighed a tonne and as I saw what was in the bottom I was over the moon.
My net of fish: 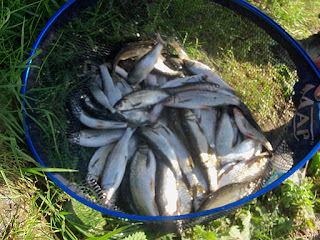 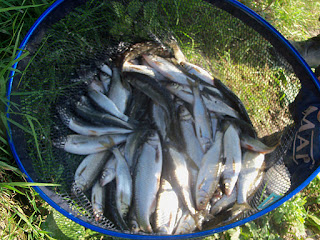 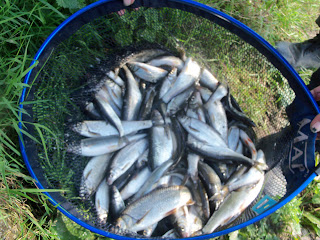 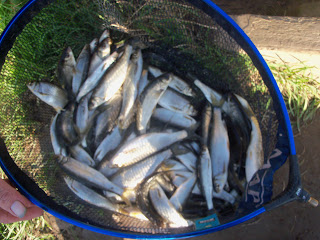 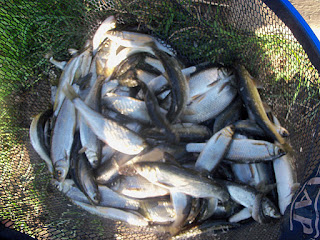 To put into perspective how much this net of fish means to me I take you back to last winter on the Dee on the same stretch I set out to try my hand at trotting, not really knowing how to do it and having only basic knowledge of what I was doing picked up from watching what I thought the people who where catching around me where using.  I sat there while everyone around me pulled out fish after fish from the peg above me and below, not to mention the anglers on the far bank match also getting a bite a cast.  Its times like that when you realise you are doing something seriously wrong and I can say without any apprehension that this was the lowest ever point of my angling life.  Saturday I was catching fish after fish after fish while people in the match across from me struggled for bites and after being in that situation I did feel for then but deep down I could not help feeling a great sense of satisfaction and really felt for the first time ever on the river like I had cracked it and what a great feeling it was from where I was only last December.
Sunday 23rd October
My dad had stayed at home the previous day due to recovering from a bad flu bug the previous two weeks but we decided that a fishing trip was long overdue and we made our way to the Dee for a short session.  My dad started off on the feeder and I started by trotting the few maggots I had left from the session the previous day.
The fishing gods really where shining down on us this weekend as me and my dad proceeded over the next 5 hours to take no fewer than 8 grayling over the pound mark with the specimen below being the best of the bunch going 2lb 4oz on the scales. 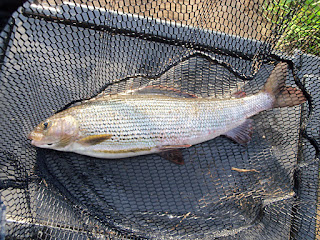 The session did have one bad point though when a flock of 18 cormorants flew over head, this bird was a problem last year on the river with then landing on farndon in great numbers and talking vast numbers of fish.  The birds, i thought where now under control due to the lack of sightings of them recently but this flock has got me worried as a flock of birds in that number could devastate a stretch of river if they land on it daily.
Both me and my dad enjoyed our session on the Dee on Sunday and looking at the net at the end we had no room to complain and we left two very happy anglers.
the net: 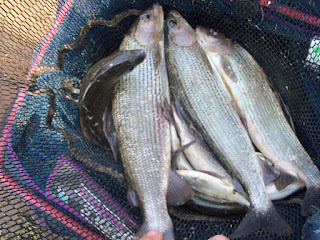 ONE WORD OF WARNING TO ANY NEW ANGLERS TO GRAYLING FISHING IF YOU ARE GOING TO KEEP THESE FISH IN YOUR KEEP NET TIME MUST BE TAKEN TO HOLD THE FISH IN THE LANDING NET IN YOUR KEEP NET WHILE THEY RECOVER FULLY WHICH WILL NORMALLY TAKE UPWARDS OF 5 MINUTES I NORMALLY LET THEM GO AS I CATCH THEM BUT KEPT THEM ON SUNDAY FOR A FINAL PICTURE OF THE BAG AT THE END.
That is all for this week and I done forget you can follow me on twitter by adding @satonmyperch
till next week
tight lines
danny
Posted by Danny at 19:52